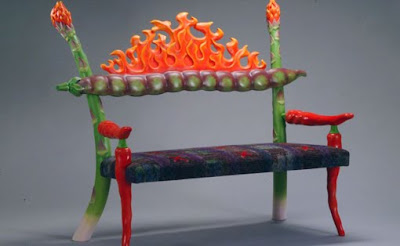 Here it is, the end of the first month in the new year and I feel like I have already lived the remaining 11 months. That's right kids, its been a whirlwind from the get go and I am gearing up for a couple of the big events that have been kicking my butt. The one really major event is the exhibition I am opening in Kipp Gallery at IUP. Just to remind you, I spend a lot of my time as the Director for the art department's gallery here at IUP. I will be opening "The Far Side of Function: Contemporary Works in Wood" on this coming Tuesday 2/2. This is a really great exhibition but also a really large exhibition. I had a local gallery in town involved from the beginning but they had to pull out due to the fact that they are still under construction and also out of funding ...hmmmm...can you say, "cart before the horse"... anyways, being a little creative with this show I was able to spread it out into our Performing Art Center and all is well. This show has such wood luminaries as Jack Larimore, Craig Nutt, and Tom Loesser and includes furniture based works and large scale sculpture that will be placed outdoors. I am almost ready...just a couple more tweaks.
A bit of personal good news... I have been curated into a very interesting exhibition at the Pittsburgh Center for Art. I will be dropping off/installing my piece this weekend. The show entitled "Cluster" will sprawl throughout their entire space as the building is broken up into separate galleries. I know a couple people that are also in the exhibition and I am very pleased to be included along with them. That show opens 2/5 and runs through March 28. Here is part of the statement from the curator...Cluster takes over all PCA's gallery spaces at the Shadyside campus and features invited artists who've investigated the spatial device of connections. These connections might be obvious, esoteric, direct, or juxtaposed, and elicit a fundamental element of artistic discourse. Welch says these artists are, "working within their interests to profess what they know or do not know, for a purpose that is both self and collectively informing."...
...sounds cool. Here is the piece that is going..."Poppy Field". 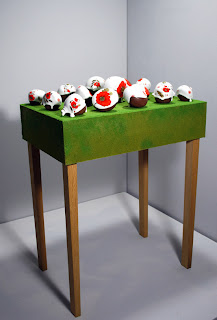 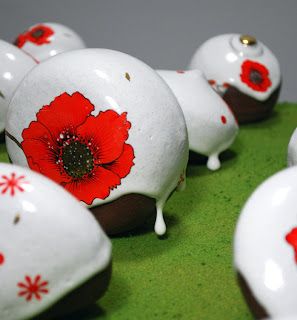 And finally, I wanted to share another bit of my recent trip to Athens, Ohio. Actually, this part is from a short side trip to the little speck of a town called Nelsonville. After we loaded up on fresh baked cheese and sausage bread and Turkish coffee at the local farmer's market we took off to visit this hipster mecca. It was no more than 15 minutes outside Athens and was refreshingly free of University propaganda and large groups of drunk frat boys. Nelsonville was an old coal mining town that bit the dust years and years ago but has since been revived by local art loving folks. There are 7 or 8 galleries around the main downtown couple blocks along with good eats, coffee, and a very cool old opera house turned hip music venue. One of my favorite things about this little area was the sidewalks...all made from these super cool salt glazed star bricks. The link built in here is a thorough and folksy account of that areas past and the production of these bricks. 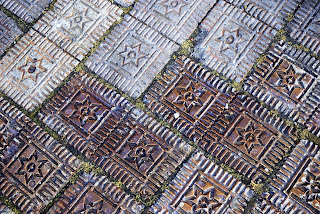 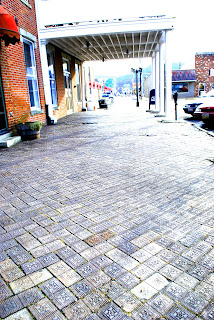 So there you have it...a little crazy blog
meandering on a bitter cold winter day...hope you are staying warm. Until next time...cheers.
Posted by k.houser at 10:35 AM 3 comments: 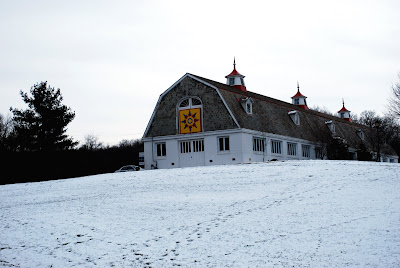 I returned yesterday from a very eventful and relaxing weekend in Athens, Ohio. I left early Friday morning and hightailed it with my wife and daughter to the Dairy Barn Arts Center, where I spent a couple hours installing my wall piece, Tubors and Corms: Landscape #1. I also dropped off another small scale sculpture and a few pieces for the gallery shop too. The opening was jam packed with people and I was told that this venue will attract a big crowd the whole time there is a good show on exhibit. The work for the "OH+5'10" was all solid and from many different mediums...everything from installation pieces, photography, painting, small sculpture, and of course...ceramics. This exhibition is the Dairy Barn's 7th regional biennial and I was very happy to be a part of it. I met and talked with a couple big name clay dudes while shmoozing at the opening too...Tom Bartel and Brad Schwieger who both teach at OU. Tom has curated the next exhibition coming in to the Dairy Barn... figurative ceramics. I have always liked both guys' work and enjoyed chatting for a while with the both of them. Here are some images of the space and my work on the far wall and on the perimeter, also a couple nice ceramic works that I liked...Tina Gebhart's salt fired vessels and these wild ones by somebody whose name I have forgotten...sorry...cool pieces though. 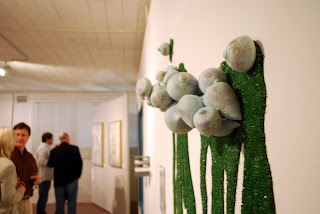 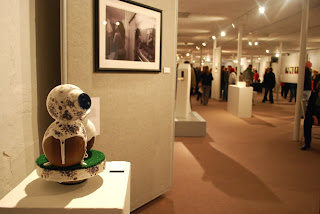 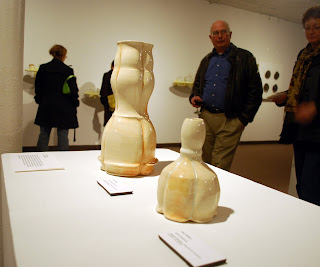 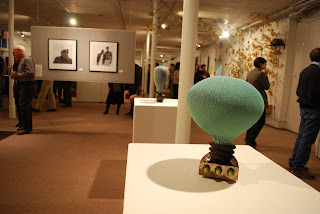 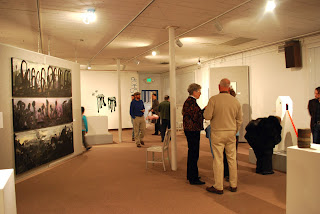 First I must remark on the size of the space...its HUGE! It was an actual dairy barn with a long history as a property owned and operated by the local lunatic asylum. That's right sister, in case you did not know, Ohio University bought up the very large asylum properties and surrounding land where the dairy barn is today. The Dairy Barn is not associated with OU, but instead inhabits the very fringe at the bottom of what is today called "The Ridges". The barn was part of a much bigger complex that was originally built to help the"hospital" be self sufficient and also for the patients or residents to come over and help work the farm. Now, the "Ridges" complex houses several different departments for OU including the University's Museum.
The girls and I enjoyed tooling around town and exploring the nature trails that were dotted with several cemeteries. The oldest dated back to the late 1800's. That cemetery along with the second one we found only marked their dead with very modest headstones with only their patient number carved in to the stone. The third grave site however, had actual names and dates carved into low set stones. From the literature, it wasn't until the late 40's or early 50's that this practice became common for the institution. In the 60's and 70's, the asylum was falling into great disrepair and due to the size, it was difficult to continue the upkeep and was later shut down in the 1980's. There are still many unused and unusable buildings in this creepy collection. My wife and daughter wondered the whole time why they had not seen this place on one of their favorite ghost hunter shows. 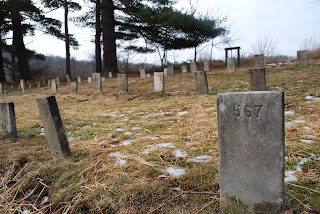 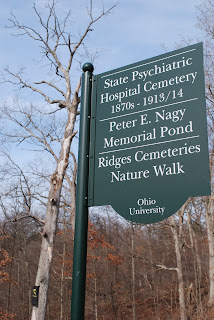 Like I said, this was a fun weekend and it will be fodder for a few posts...Nelsonville and star bricks...The Kennedy Museum and the OU faculty show...so stay tuned gentle reader...more to come. 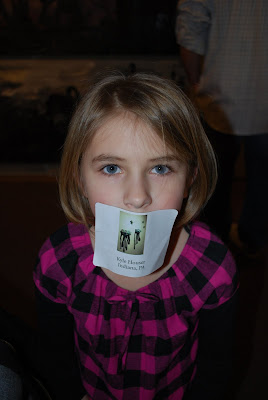 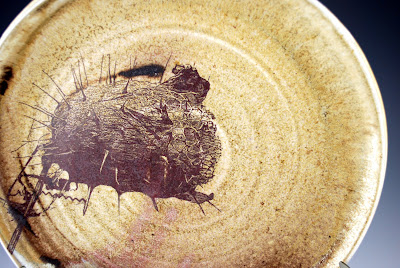 Wild I tell ya!...I just wanted to show off some newly decal fired pieces...most of the forms themselves are from the last wood firing me and Nancy fired off right before Christmas. The images are new... 99% new images that I have been working on. They all started as my digital photographs and I manipulate them pretty heavily in Photoshop before printing them from my laser printer. Two of the large wood fired platters are sporting my images of the Wild Cucumbers or Balsam Apples, that Nancy has growing all over and around the studio and kiln area. They are strange, short, spiny cucumber like pods that grow on thick and vigorous vines. In the late fall when it starts getting really cold they dry out like gourds on a vine and their ends pop open. The interiors are complex structures that resemble a loofah gourd. I have been checking out these crazy little boogers for a while now and I am pleased to recreate them as decal images for these new forms. The first one is 11 inches across and lovingly warped and draped in ash from the firing and the second is 12 inches across. Its surface is stamped and marked and full of chicken grit breaking through its sheen. Both rough and tumble forms really show off my images of those oh so wild cucumbers...click to enlarge. 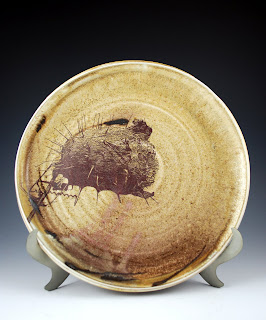 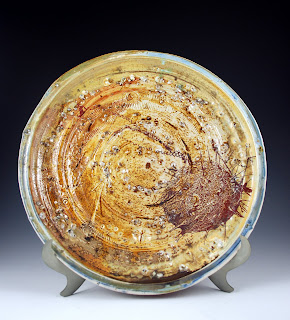 Another new image I recently made was of the Hops that are teamed up with the Wild
Cucumbers in a plot to cover the studio. The Hops too started as a digital photograph...below is a nice low, shallow but wide bowl that has the new Hops images. 10 inches across. 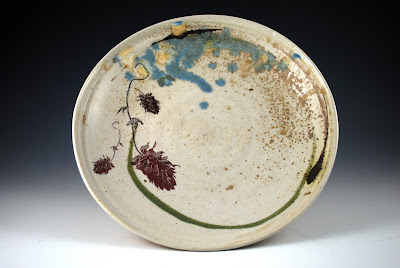 I will be posting a bunch of new work on my Etsy site soon. Hopefully just in time for some Valentine love...you know, all anybody really wants from his or her significant other is a nice piece of pottery...ahhh, if that were only true. Anyways, check out my cool new fav-o-rite little design..."Dodo farting flowers mug"...now really, what a sexy and romantic gift that could be...nothing says I love you like flowers from an extinct bird's sphincter. 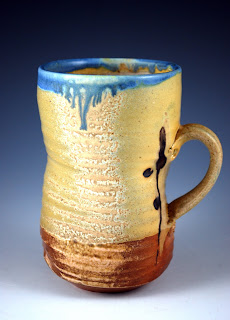 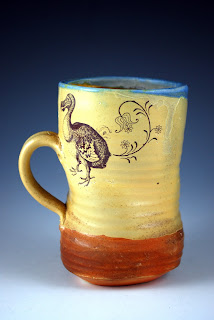 In the next day or two, I will be off to Ohio to install my wall piece at the Dairy Barn Arts Center in Athens. I have that piece and another in their exhibition OH + 5'10, its their 7th annual regional biennial. I am going to install, drop the rest off and then stick around for the opening on Friday the 15th. I will be sure to post images from the show next week...same bat channel. 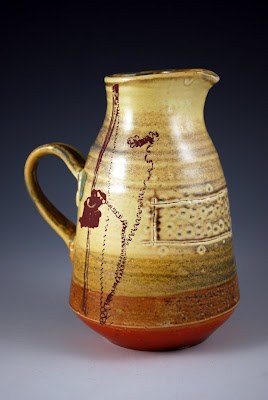 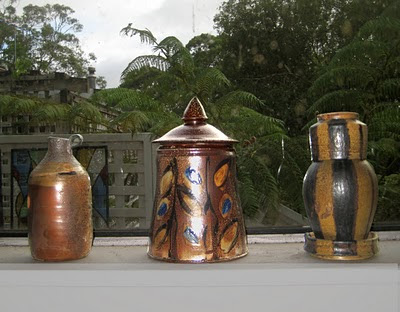 Hello and HAppY New YeAr!!...just a quick post to start the year off right. Yesterday I got an email from a person in Australia that bought a couple pieces from me and he sent me the link to his own blog, where he wrote a really cool post. If you click the link to his blog, you can see some of his favorite new wood fired pieces...and awww shucks, my bottle is one of them.
The funny thing is, he also has work on this same post by two of my friends. Josh Floyd lives nearby and is a regular fixture in our little pottery community here in the middle of nowhere just north of Pittsburgh,PA. If you have a second check out Josh's blog and see some of his good looking pots. The other guy is Justin Lambert...I met Justin this past summer at Chautauqua. He came to teach for a couple weeks and we had a whole lotta fun drinking beer and cooking Italian sausages and corn on the cob in between firing kilns and making stuff. I have been following Justin on his facebook page as he recently tore down his modified bourry box kiln and built and fired his new Anagama kiln. I really like Justin's work too and you should see the new pieces coming from that kiln! Like me, both these guys have Etsy sites and if you are in the market for a nice wood fired mug(and maybe you already own your very own Kyle Houser mug)you should check out their shops!
Here's to a productive 2010 for all!