A productive day in the studio... 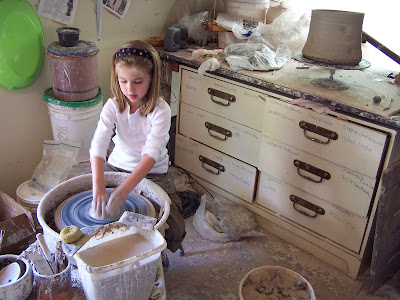 Sometimes a productive day in the studio is gauged in a different way...this past Saturday was one of those days. It wasn't that I sat down and made 20 cups and a couple sets of plates, it was a day packed with quality more than quantity. My wife and daughter came up to the studio on this warm sunny Saturday...we ate lunch and my 5 year old worked on my wheel for awhile. She has always liked to hand build in the studio with me and it is just recently that she has been asking me to teach her to throw...she is getting there...and we will keep practicing. I loved these pictures, the light was streaming in from the wide open barn like doors on the side of the studio
and the breeze wafted through the space. Look at that face...what concentration...what focus! 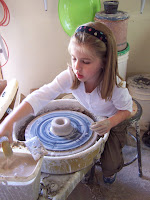 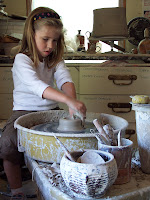 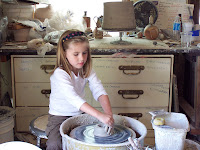 After the girls left Nancy and I worked on the train kiln some...so far so good...this Thursday we are going to try and finish a good portion, if not most of the kiln. The images below show the begining of the fire box and the floor of about 1/2 the ware chamber. 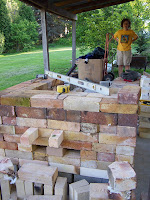 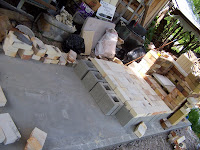 And somehow, I even managed to finish a couple bigger pieces, trim some cups and put handles on some mugs...it was a quality day no matter how you look at it...stay tuned for more kiln updates! 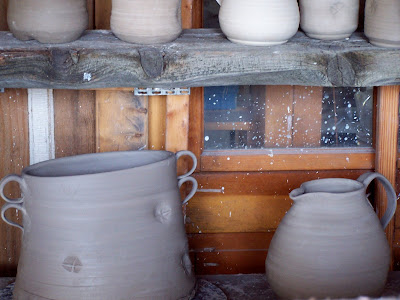 PS... I am a huge music geek...check out my cool album quilt in the side bar...you can click on the rotating images and it will take you to last.fm which is a nifty music site that lets you build playlists and search out music...I have another widget from them in my myspace that shuffles and plays my playlist automatically...so if your hanging out for a while or if you make multiple visits, you can hear different songs. On my album quilt you will find some of my perennial favorites and some interesting new artists too...put your needle tool to the vinyl and pug with a beat.
Posted by k.houser at 8:02 PM No comments: 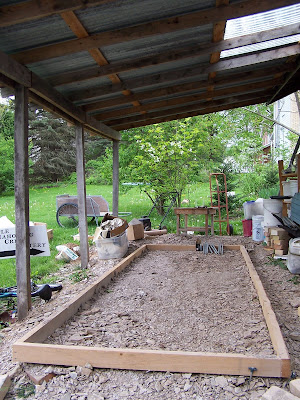 Watching concrete dry...sound exciting? Well, actually it is pretty exciting...especially when that concrete is the slab for the new kiln that you will be building. Nancy and I will be building a train style kiln originally based on a Robert Sanderson design. She researched it all out and found several different variations of the plans...scavenged out all the bricks...and got me and a few others to wheel the concrete over and dump it into the footprint. Nancy and I framed up the space, then leveled it all off a few days before...we were ready! 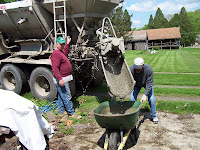 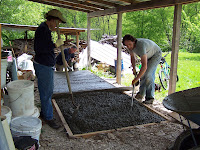 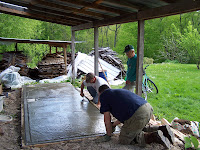 We had a perfect day to get the job done today...Andy,who is up from Florida for the summer,(he uses Smicksburg as his base while he does festivals around the Northeast) and I wheel barrow loads of concrete from the truck over to the other side of the studio. There, Nancy, Dan Boone and local potter friend Josh Floyd spread it out and level it off. After the concrete was all in Dan and I finished smoothing down the surface while neighbor Ellis carefully supervised. 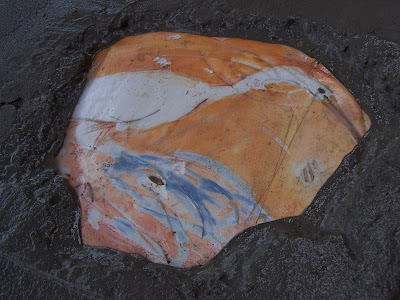 Nancy set a couple large shards in the drying concrete and we were done for today. More postings to come of the kiln in progress...stay tuned.
Posted by k.houser at 9:18 PM 2 comments: 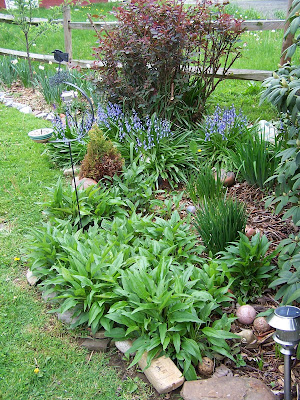 Hello gentle reader,
I am squirting out yet another quick posting here...I honestly have a bunch of stuff to tap away on these keys about but I just do not have the time...soooooooooo, here are a couple of quick items. I opened a new etsy store and also helped my friend Nancy open her shop on etsy recently too. My shop is called Homeslice...the place for clay things. As I explained to a friend, it is my freak show tent in my own little carnival...ceramic oddities abound...check it out. Nancy's shop is called Little Mahoning Creek Pottery and it features her wood fired functional ware. I did a posting on Nancy a month or two back and it has images of her, the studio and her work...take a look at that then cybertruck it on over to her etsy shop to buy, buy, buy!

Also, Nancy and I are pouring the foundation for a new train style wood kiln on Thursday! Pics and posting to come on that undertaking.

I just got back from NY state...went up to get the skinny on my new summer job. I will be working at Chautauqua Institution in the ceramics studio. I will be managing the studio and work study students as well as firing all the work...I am KILNMASTER! I think the position should come with a viking helmet. Its a great gig and I am very pleased to be there for almost 10 weeks. Should be cool...and yes, there will be pics and a posting about this soon!

hope your gardens are blooming...
Posted by k.houser at 11:39 AM No comments:

Good morning...just a short note to thank all who came to the opening of my show, Greener Pastures and Fallen Heroes, with painter Shawn Watrous. It was a busy weekend in the burgh...the Carnegie International opened as well as the biennial at the Pittsburgh Center for the Arts. I can't wait to see the International...it is always an amazing show, if I am able, I will try to get some images and write a posting for my trip over there.
Please go to the boxheart link and click on the big painting in the middle that says Myth and Revelation to see pictures of the work and my opening...they have already posted a bunch of images.
I'm going back to finishing my coffee...have a great week.
Posted by k.houser at 8:53 AM No comments:

First wood fire of the season... 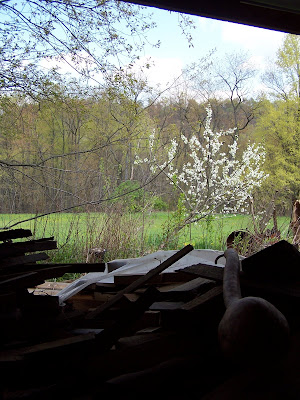 Looking out from the pole barn area that covers the kilns and all the wood you would never have guessed that we started this day with snow. That's right gentle reader, SNOW. It came down in the morning for a couple hours...not just flurries but fat, fluffy, flakes. Thankfully, it did not last too long and by noon there was no trace of the strange weather from the morning....ahhhh, spring was back...sorta. 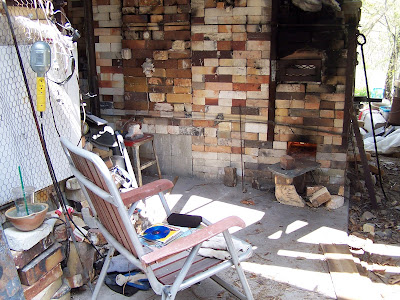 I made it up to the studio around 1:30 and by then it was shaping up to be a nice mild afternoon. Nancy started stoking the kiln slowly around 8 am. We brought up the temperature at a gradual pace due to the number of green pieces in the chamber. During my afternoon shift I kept the steady pace and slowly increased the stokes to begin a transition to higher temps. 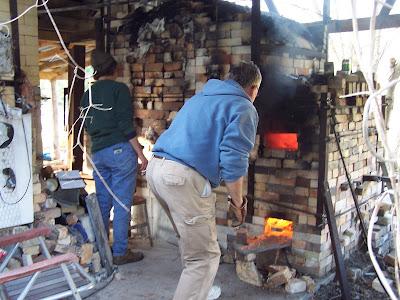 Around 7 pm Nancy and friend Dan Boone took over and continued to crank her up...and by dusk we had heavy black smoke of reduction pouring out the chimney. Cindy Rogers came for the night shift...She and Dan really got it rolling along. 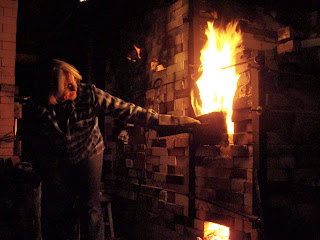 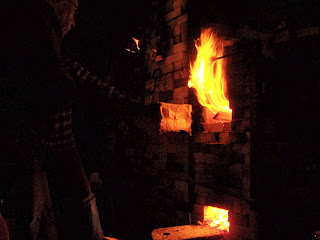 We added the soda mix in between 2 and 3 am and by 4 am we had cone 11 bending...a little more work to even out the kiln and around 4:30 we were closing shop! Time for a shower and some sleep! 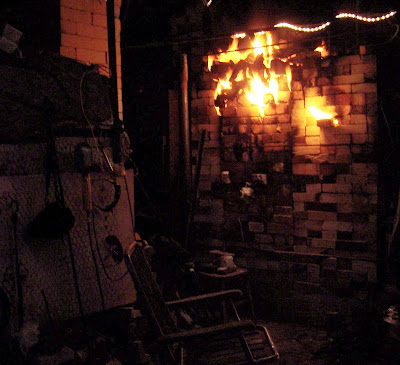 Nancy and I unbricked the door Friday night around 8pm. Things were looking good. We really made an effort to damper in more and create a heavier reduction atmosphere. I think it was successful because the clay bodies blushed more and our ash build up was considerably more than usual...in the fire box as well as through out the ware chamber. 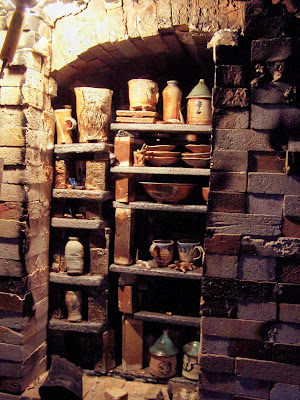 Nancy and I were both pleased with the results from the firing...here are a couple shots of a large group of Nancy's pieces and a set of dessert plates that I made... 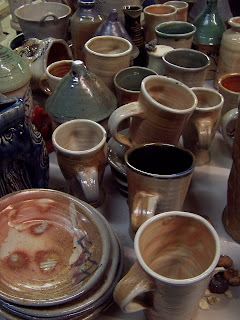 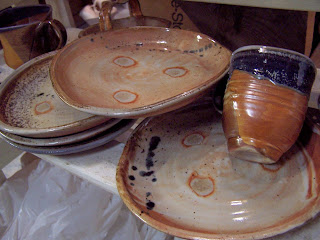 I also was so inspired by the Yunomi show that I looked at on the Akar website that I was compelled to make a bunch of cups myself!...I found out about this show by looking at Emily Murphy's potteryblog...which if you have not checked it out, you should...anyways, she was in the show along with so many very notable potters. So here are some of my cups, fresh from the fire and still a little sooty...a few will be getting decals. I recently shot a bunch of new images to make decals with...the plates will also be a recipient of the new images! Not bad for the first firing of Spring. This posting aslo served as a nice distraction from the impending opening of my show tonight...as much as a self promoting art whore as I am, I would rather the work be there without me! 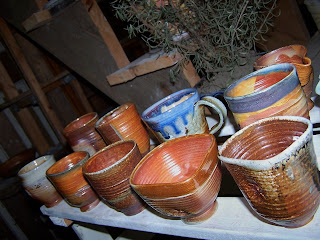 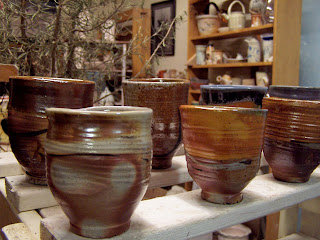 Watch for some of these pieces to be for sale on my etsy shop site...homefry ceramics.