With the big holiday weekend over and some time(not much, but some) to keep throwing, I am busy working and working to have enough of a load for the wood kiln in a couple weeks. I will be firing with Nancy Smeltzer at Little Mahoning Creek Pottery...my old stomping grounds. These days this requires an extended effort on my part as I must travel almost two hours...and come early and stay late. Currently I have no electric kiln so I need to get my pieces bisqued prior to the firing...glazed and wadded so that I am ready to help load. AND of course I want to put my time into the firing as well. This means 2 - 3 days of being away from home and family...but just think of the pots that I will get out of the firing!

I have been mostly making mugs to start and as I have been to a couple picnics and a large family reunion lately, my mind drifted back to...BEER. Beer is a great thing. I enjoy craft beers...micro brews...brown, brown ales. So while I was making mugs, I thought I would make some bigger mugs, tankards if you will...tankards complete with that thumb rest thing...seen in the pictures here...what the hell is the name of it?! I have always shied away from that thumb thing, thinking that it seems dated or so passe...it just didn't seem to fit into the style of rustic-contemporary-Japanese -American Pop culture thing that I was doing with my wood fired work. BUT, never say never I guess. Here are a couple of shots of the tankards(above and below) and their "thumb thingys".
As I throw new pieces to be fired I am also working on a couple slabs that I wood fired...here is the one I recently fired the laser decals on. I still want to add another layer by firing some commercial decals on the surface along with a little gold luster. I will be mounting this 13x13 inch slab in a nice wooden frame to finish it off. The frame will be something new to me...I guess we will see. I love creating the images...the clean crisp graphics always look great in contrast to the more abstract backgrounds of glaze and random stuff from the firings. I think I could be content just creating images...screw the throwing and firing...that's a lot of work...and pretty dirty work at that. I need a somebody that doesn't want to finish their work, a somebody who only wants to throw and fire...heck, I would even do the glazing. Any takers out there? ...as always click on the pics to see bigger.... 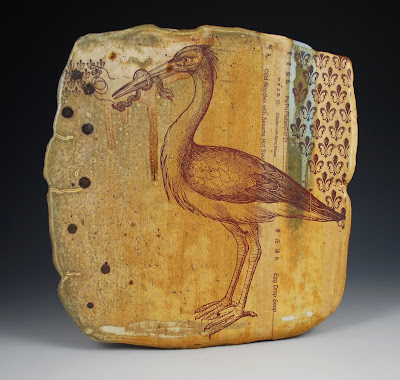 In the mean time, have a beer for me...cheers!

Hello and a happy Mudder's Day to all you wonderful mudders out there.

I thought I would post some freshly fired eye candy for you all to check out. My wife is now napping off this morning's brunch and my daughter is outside playing and I have a few minutes to myself. Dan Kuhn just fired these pieces for me in his electric kiln. The mugs and tumblers were from the last firing I did with Nancy over at Little Mahoning Creek Pottery...and by the way, it looks like we will be firing again the beginning of June. All of these, like the ones I posted a couple weeks back, are now being sold out of the Self Serve Pottery Kiosk currently located here in Beaver Falls at the aptly named Beaver Falls Coffee &Tea company. Monday morning...as soon as they open, you should grab a friend and rush right over there and buy, buy, buy then sit and eat and drink...just sayin'...but for now enjoy the pics and let me know what ya think...click on the images to see them bigger

It was 1986 in Gainesville, Florida and I was working at a regional record store chain based out of Atlanta...Turtle's Records. Turtle's was big in Georgia during the 80's and early 90's and it branched out into North Florida during this time...I'm not so sure they are around anywhere these days. But it was back then in Gainesville that I heard  the Beastie Boys for the first time. We had the promotional posters up everywhere for the heavily anticipated "Licensed To Ill" and when the record, and it was literally a "record", was released we played it as much as we could get away with playing it. The sound was still new to me, rap was not a favorite of mine, but this sound was becoming a lot more mainsteam with Run DMC  also breaking out that same year with crossover hit cover of Aerosmith's Walk This Way featuring Steven Tyler. The Beastie Boys along with groups like Run DMC blazed a new path in sound by blending the very urban sound of rap with a punk and pop aesthetic... aggressive music that you could shake your ass to.

It was yesterday that Adam "MCA" Yauch of the Beastie Boys died from a three year battle with cancer. MCA dead at 47...wow. I grew up with these guys, we were very close in age. Major bummer. And, its not like these guys ever became irrelevant, I am still listening to "Hot Sauce Committee Part 2" which came out last Spring. Their music developed quickly in those first four albums and by 1994's "Ill Communication" they had cemented their sound by blending rap, funk and rock into a genre jumping, more broadly appealing groove. I have listened to their whole catalog and own most of it on various audio media but it was those first four records that played a big part on the soundtrack of my life during those years. Music is a great place-marker in the stream of time.

"Your knees start shakin' and your fingers pop, like a pinch to the neck from Mr. Spock"...Adam"MCA"Yauch

If you have been reading my blog for a while you know that music is a big component of my interests. Homefry Sketchbook is clay/art, garden, and music for the most part, although random topic posts help to season the mix. Each year end, I feature a music "best of" and on a regular basis feature Youtube videos of what I am currently listening to on the sidebar of this blog.  So in honor of MCA, I'm keeping it music chat today and recommending some new tunes to check out for the soundtrack to your own life. The following are in no particular order.

Alabama Shakes, Boys & Girls...She sounds like Janis Joplin and James Brown's love child and her band really rocks. They were featured on my "watcha listenin' to" for the last couple weeks with their stellar single "Hold On"...but just don't  buy that, the whole record is a winner...you will be hearing about this band.

Justin Townes Earle, Nothing's Gonna Change the Way You Feel About Me Know...Earle is flexing his great songwriting skills on this record. More mellow than his previous record but the songs are really strong and the addition of more horns gives a bit of a Van Morrison feel to his rustic country fried tunes.

Jack White, Blunderbuss...this has only been out a week or so now and I have been listening to it quite a bit. I actually bough the CD at my local independently owned record store in Indiana, PA and have enjoyed the ease and simplicity of just poppin' the disc in my car player...no wire...no scrolling through my Ipod...yes! Jack White pulls out all the stops with his tweaked out guitar blues mixed with traditional elements, interesting song structures both sparse and lush and plenty of piano banging too.

Galactic, Carnival Electros...If you do not know, Galactic is a New Orleans band that was and still is immersed in the rich music traditions of the area. Its just that they have grown...they are an amazingly successful blend of old and new...fantastic artists/musicians embracing change with energetic party music...New Orleans jazz meets contemporary urban funk.

Death Grips, The Money Store...MCA himself might have liked this pick. This is one of the most visceral records I have listened to in a while. Aggressive, dark rap...screamed in your face with a punk ferociousness...and major butt shakin' and sickly catchy grooves. Blast it from your car(if I was 20) or rock it on your headphones while running on the treadmill at the Y(since I'm an old fart).

"Because you can't , you won't and you don't stop"...Beastie Boys, Sure Shot.