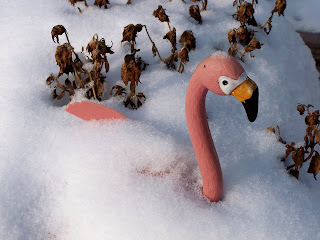 Dear gentle reader,
If any of you are like me, you might say 2007 was not that great of a year...but it did have a handful (two handfuls really) of memorable and/or standout moments... or maybe just some things that made the whole stinking year a little more tolerable. So this is how bored you can be on snowy days stuck in the house, here is my top ten from the year that was 2007. These are in NO ORDER...none, nada, that would be way too much work for this blog writer. Feel free to get cozy and bored with me and leave your top ten list in the comments. Here goes...(are you hearing a drum role too).

10. Graduating with an M.F.A.
9. Wife, daughter and I cruise to Bermuda for the week!
8. Wilco CD...Sky Blue Sky
7. Daughter's first day of kindergarten
6. Dale Chihuly exhibit at Phipps Conservatory...great plants, surreal glass landscapes,awesome
5. Artist residency @ Artist Enclave at I-Park...1 month...East Haddam, CT. work,work,work
4. Having my work chosen for the postcard of 'small works' exhibit...Lillstreet Art Center,
Chicago,Il.
3. First big NFL game...Steelers vs. Jags...my hometown and my adopted new one...SNOW!
2. Seeing the Yo La Tengo "concert" at the Warhol, intimate,wife and I sat in 2nd row middle,
amazingly cool and beautiful
1. My little girl's face this past Christmas...Santa is so alive at five...
Posted by k.houser at 8:44 PM 2 comments:

Return to the mothership... 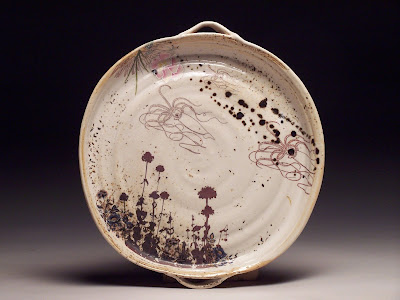 Winter whipped through my garden and left only skeletons in its wake. This disturbed the colony of of sheepish garden squid that had sought refuge in the tall zinnias. Only so very rarely had I ever caught a glimpse of those elusive creatures, and usually it was only a tip of a tentacle sliding behind the dense lower growth of the garden. Recently, this all changed and I became a believer on the last full moon.
That evening as I grappled with the garbage can, I heard a rustling from the stiff and mostly frozen corpses that I once called echinacea, giant dahlias, and zinnias. More rabbits making their winter burrows in the aftermath of my garden I just figured. When all of a sudden there was a flash of pink light in the sky directly over the moon. As I looked up I could make out the faintest linear shape coming into slight pinkish focus and layering over the bright full moon. It looked to be petals unfurling from a central point and stretching out and across the illuminated night sky only to dip downward towards my frozen patch of western Pennsylvania. And that's when I saw them, tentacles reaching to meet the crisp black air currents coming from seemingly everywhere. There were two or three already rising from behind the large winter structure that was my green and yellow stripped zebra grass and from the corner of my eye I saw a larger one ascending into the breeze. Several more escaped my mountainous rhododendron and the last one deftly maneuvered through the barbs of the roses. They floated upwards and followed the path that the strange pinkish petals seemed to be making in the sky. Their long bodies moved like kites jerking on a string in a strong breeze. They were awkward in the air but still moved with direction and purpose. Tentacles touched the rooftops and flapped like streamers moving steadily upwards. Within a minute it was over and all traces of this strange happening were gone. I debated about telling my wife about the encounter because she would think that I am doing more than just taking the garbage out.
I knocked the snow from my boots and tossed them in the corner of the mudroom as I came in the house. Still bewildered from what I had just witnessed, I walked through the kitchen and into the large windowed nook on the back of my dining room to once again stare blankly up into the full moon sky. There my five year old daughter stood with her eye still affixed to the lens of her new telescope that Santa had brought for Christmas. Without looking up she gave me a thumbs up sign and said, "Don't worry Dad they'll be back".
Posted by k.houser at 8:47 PM No comments: 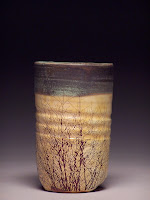 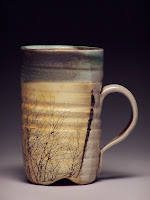 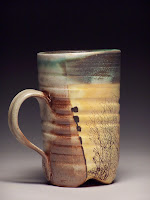 I'm posting images of some of my new work that won't be appearing on my Etsy site...well, at least not any time soon. This first image is a wood fired mug with shino glazes and a Rob's green over the lip. It sports one of my new decal images in a wrap-around fashion...this series of images I'm calling "winter structures." This particular image is the top portion of a large tree near my home now bare for the winter season. 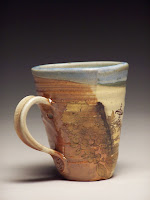 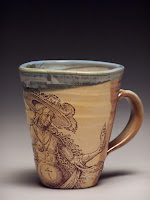 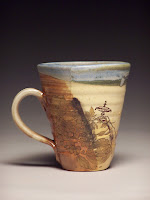 This is the "Fool's Gold" mug ...a wood fired beauty that I have refired 2 more times. The first 04 decal is that of a prostitute which I lifted from a 15th century German wood block print. The second is a gold lustre commercial decal that was fired at a much lower temperature...gotta have that bling! 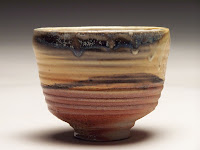 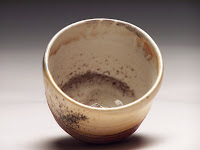 Here's a great little tea cup....I love this piece, the picture does not do this cup justice. Juicy, juicy glaze...rich, reduced slip... good ash...it must have been in the sweetest spot inside the kiln. 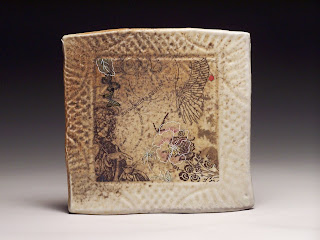 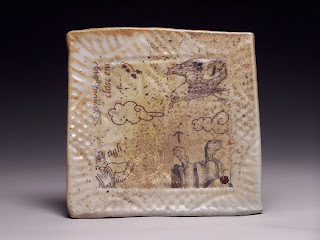 These are wall tiles that I created in collaboration with my friend Nancy Smeltzer. Nancy is a wonderful potter with a unique and distinctive style. She is the one person operation that is Little Mahoning Creek Pottery. This also happens to be where I have been wood firing for the last couple of years and the main place where I am the squatter potter! Nancy made the forms and I created the images by layering laser printed decals and commercial decals in a surreal collage. 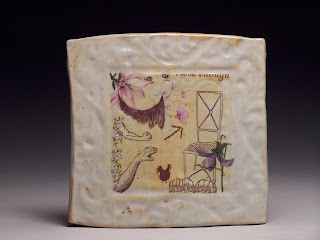 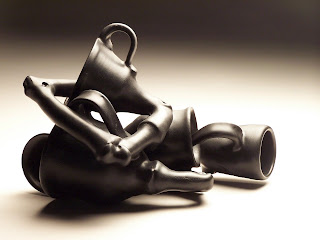 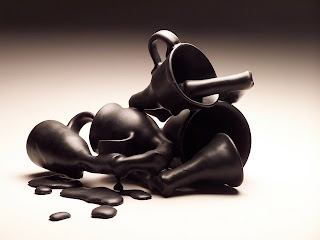 Welcome gentle readers and thanks for coming as I start my blog quest. This blog is intended as a very loose forum for me to share images and ideas with you...and hopefully visaversa...

I'm a ceramic artist and educator living in PA. I am like a vagabond bouncing between spaces. I live in a place where I have had the great opportunity to meet generous friends who have given me space to work and fire. I hope to highlight them on this, the inaugural voyage into blah, blah, blah.

I also want to post new and experimental pieces on this site...image quality is not an issue...just post what ya got...think sketchbook...I will post work in progress type stuff as well as finished pieces. I also want to post items/events/books/articles/quotes/peeps that get me thinking about what I am currently making...please feel free to dialouge with me.

If anybody is interested in seeing more of my wood fired ceramic ware please visit my online shop khouser.esty.com . I love my etsy shop. If you have never been to the etsy.com site, c'mon, you been under a rock? Actually, I just learned about it in this past fall...anyways...it is a great site that hosts all handmade art/craft/kitsch...holy smokes, you can get addicted. my advice, check it out.
Posted by k.houser at 11:12 AM No comments: