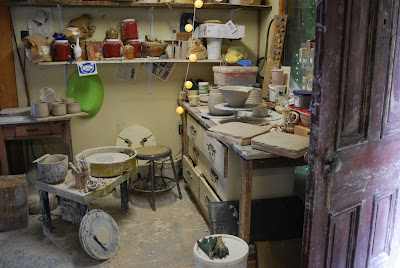 Turn down the lights... 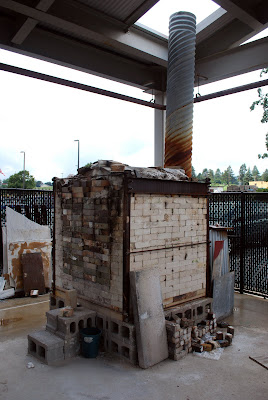 Turn down the lights and lock the door... I've got some sexy pictures I want you to see.

We unloaded a very fine looking kiln yesterday. I fired it in 12 hours after an overnight of candling. Nancy came and helped me introduce about a 6.5-7 pound mixture of soda/soda ash and salt into the kiln on thin wooden planks. Honestly, that's all we could get in before cone 11 was bending... but I'm glad we stopped there, it looks like the perfect amount especially after a fairly heavy reduction.

It has felt very satisfying to be making strictly utilitarian pieces lately. I made my pieces from 3 different clay bodies...you can see the difference in most of the images...porcelain(where the glazes are bright and body white), a darker stoneware(dark body,iron spots, slight orange peel on surface), and a sandy stoneware that responds really well in atmospheric kilns(highly pebbled surface). Each clay body yields a specific look in the soda/salt ...hey, there's something for everybody here. And as nice as these clay bodies look, I will be making new work from a very white stoneware for our upcoming wood kiln firing. But that's enough of the chit chat...lets get down to looking at some of the highlights. The images that follow are from us unloading...tumbler set by Nancy Smeltzer...slip cast porcelain tumblers by undergrad art student Talon Smith...and heads by my friend Sarah(the one who came and helped us raku) and the rest of mine I shot at home. Light some candles, pu 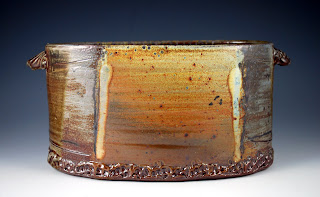 something more comfortable and look 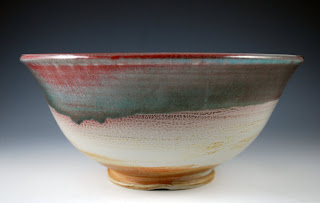 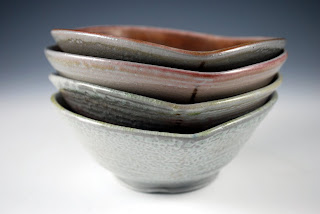 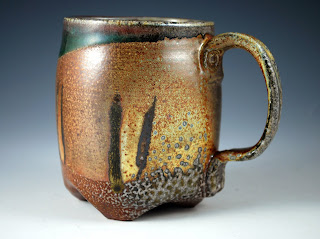 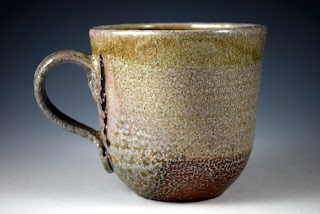 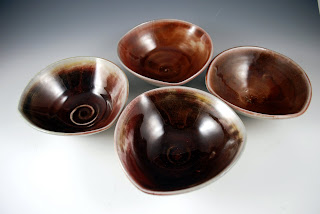 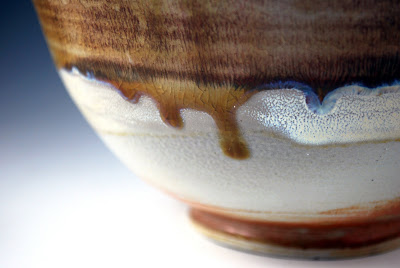 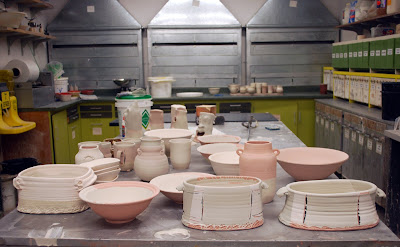 Now that's a post title...I will probably be getting some new visitors that might have been Google searching for something very different... but the title is very appropriate for the content of this particular post.

I'm waiting for the rain to taper off this morning so I can go and load the soda kiln over at the university. Nancy is meeting me around 3:00 to lend a hand, hopefully by then the rain will have stopped. I'm firing a bunch of larger space eaters of mine, a couple dozen cups and more of Nancy's, and a handful of student work too. I plan on candling the kiln overnight and firing it off tomorrow. The work will be a nice addition to my growing pile that I will be showing up at Little Mahoning Creek Pottery during our October studio tour. Mark your calendars now...its never too early to plan ahead to buy some nice pottery...maybe the guy who does the website for the tour will even put my pics and info back on the site(since he has had all the info for the last couple months almost)...maybe.
So while I wait for the weather to change, here's some shots of our raku firing I did with my beginning students this past Thursday night. My friend Sarah came out to lend us a hand and we had a double barrel firing...two kilns going at once...after we unloaded one the other was ready to go too. Raku is indeed dirty, smokey, and stinky but it is a true hook for many beginning students. It was originally what got my juices flowing for ceramics back in the late 80's. In the mid to late 90's, raku was all I did. I taught secondary art full time but also kept a studio in the small downtown area of Ocala, Florida. I tried to do at least 5 festivals per season...Fall and Spring ...as Florida during this time had no shortage of pretty decent art festivals. I would teach all week and then pack up the van and head out to some town(hopefully near the ocean) and set up the booth and run my mouth all weekend. But these days I only do raku for others...I think I have huffed enough toxic green smoke in my life and I have moved on to making my own work in other ways...just not as immediate.
Enjoy seeing the pics from the raku firing and not having to smell like a raku firing...salt fired pieces unloading next week! 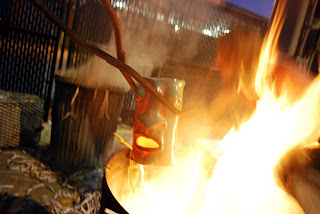 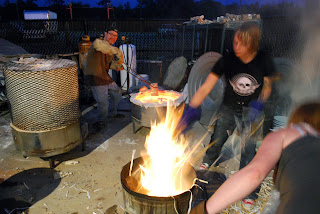 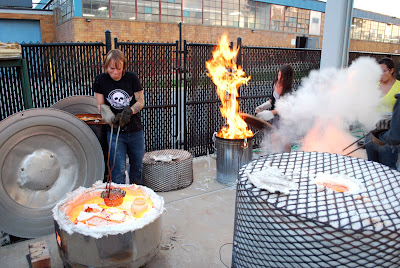 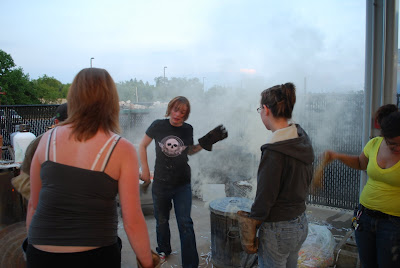 Stanky raku smoke fills the air...trust me its better from where you're sitting.
Posted by k.houser at 11:03 AM 1 comment: