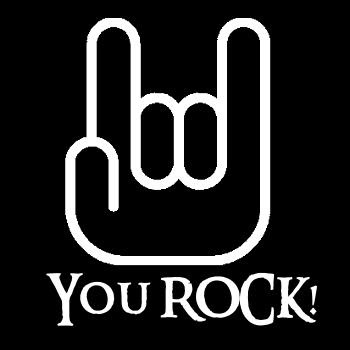 Yeah, its that time of year again...the end...and time for everybody's "best of" lists.

If your like me and never really fought the "War on Christmas" and just tried to keep the "mas" in Christmas, chances are your pretty tuckered out. You know what I mean...mas...like mas y mas, c'mon my Spanish language speakers...more and more...like more food, more decorations, more lights, more presents, and just one more beer. So while I am recovering from Christmas's war on my wallet lets get down to it...

First let me say, "man can not live on clay alone". So, what is the next best thing you ask? That's easy kids...MUSIC. Now, a countdown of the year's best in order... its just not possible... ranking my picks in a certain order would drive me crazy so Im going to toss these out there and let them fall where they may. These are full records or songs that I went back to again and again this year...they found themselves in heavy rotation on my Ipod and became my studio companions and later my traveling companions.

Abigail Washburne/City of Refuge....Back in the early(really early) Spring of this year I was listening to this record over and over. She is an acomplshed banjo player with a lovely voice who writes and sings really good songs. I still go back to this record...folky, bluegrass with a hint of India.

Gillian Welch/The Harrow and The Harvest...sticking with the ladies here, this is a fantastic record all the way through. Mostly mellow acoustic folk with dark and gritty undercurrents...shes is a great writer and she and her guitar playing partner make a great twosome.

J.Mascis/Several Shades of Why...Dinosaur Jr. frontman J. Mascis finally made a mostly acoustic solo record...Dinosaur Jr was always capable of poping out a really good mellow song in between fat slices of guitar rock but here J. has done it with the whole record. These songs wedged themselves deep into my ears and the disc did not leave my car for months. Its like your really into Neil Young and you love him with Crazy Horse but you really love those brief nuggets of broken down, solo, mellow goodness and wish he would do an album of just that(before he gets too "Adult Contemporary")...well, thats wat I mean here.

Stephen Malkmus & the Jicks/Mirror Traffic...ex- Pavement frontman Stephen Malkmus and his rocking band bust out another winner...produced by Beck no less. Great tunes, odd/funny lyrics sung in his deadpan style and a slightly more necked in approach make this a fun studio record...heck its just a solid record for anytime. Dig the single "No One Is (As I Are Be)", then jump into the rest.

Jeff the Brotherhood/We Are The Champions...speaking of rocking out...this is the record. I was slow to warm to these guys but something kept catching my interest. This is balls out, riffing, stoner rock. If your looking for intellectual and deep song lyrics, look somewhere else. If you want to jump up and down...bang your unwashed curly mane back and forth...play ferocious air guitar all over the living room...or need something to keep you going on the treadmill...now we are talking.

Fleet Foxes/ Helplessness Blues...A great record...and I say that beacuse I own the vinyl...but it is great no matter what media you have it on. Sprawling and expansive, varied and bright, good lyrics and great music...I like this one better than the first record, and thats saying something.

Black Keys/ El Camino...yeah sure, jump on the bandwagon... it seems like the Black Keys have made it baby!...these guys are good and this record is a hell of a lot of bluesy, soulful, rockin' fun with a dash of Led Zepplin and a smidge of ZZ Top...these guys made my list last year too!

Real Estate/Days...Beach Fossils/What A Pleasure...I am smashing these two into one grouping because I feel there is such a similar vibe here. Both are young bands and for both these are their second records. Both have a lazy vibe, like laying around the house all day while it snows like the dickens outside. Both have a sort of detached vocal and great guitar sound but Real Estate is a little more pollished and produced...really making their overall sound lush. I have been listening to Beach Fossils for a while now, including some of their earlier songs, and have recently purchased Days by Real Estate but it was quick to sink itself under my skin. Im not sure if its the weather right now, but Days was perfect music to stare out the window with this morning while I watched the snow flurries. Real Estate has somewhat of a lazier Shins feel to me and I am sure I will enjoy it long past it stops snowing.

Noteworthy:
Wilco/The Whole Love...best Wilco album since "Sky Blue Sky"...maybe better.
Tom Waits/ As Bad As Me...best Tom Waits album since "Real Gone"...maybe better.
Beastie Boys/Hot Sauce Committee pt.2...best B-Boys album since "Ill Communication"...don't be a hater.
Scott H. Biram/Bad Ingredients...Poor Boy's Soul/Burn Down... I am lumpin' these two guitar slingin' blues men together. Both are a one man band of damn fine, ferocious, stompin' blues. I even put Biram's video up on the "Whatcha' watchin'"...I needed an excuse to sex up my blog...mmm,hmmm.

And although Im kind of an album guy, I have decided to toss in some noteworthy songs. I admit to downloading just songs sometimes and also wishing I had downloaded just songs after purchasing entire discs....sometimes. So here are songs that were on my hitlist this year.

Boston Spaceships/ Freedom Rings...This is Robert Pollard from GBV with yet another one of his side project bands. Good record but this song is superb with a really cool video to go with it. Brand new Guided By Voices comes out in mid January!

The Head and the Heart/ Lost In My Mind...good record too...great sung harmonies and super uplifting folky vibe...can listen to this song again and again...ahh hell again, buy the record.

Well there you have it...my musical faves and raves from 2011. Feel free to chime in on the comment space and tell me some of yours...always love to find new music. Now go find these tunes...download them or better yet walk away from your computer and go find a record store and spend your Christmas money.
Thanks for tuning in to my rantings and shameless self promotions throughout the year...I hope you continue to stop by and read...I hope you even tell a few friends to do the same...hell, the more the merrier. Speaking of making merry, I hope you will be doing just that over the weekend.

homefry wishes you all a productive and prosperous New Year!!!
Posted by k.houser at 4:05 PM 4 comments:

Wishing you and yours a happy ho-ho... 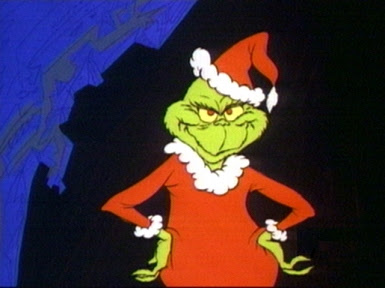 Narrator: Every Who down in Who-ville, the tall and the small,
Was singing! Without any presents at all!
He HADN'T stopped Christmas from coming! IT CAME!
Somehow or other, it came just the same!
And the Grinch, with his Grinch-feet ice-cold in the snow, stood puzzling and puzzling:
Grinch: How could it be so?
It came without ribbons! It came without tags!
It came without packages, boxes, or bags!
Narrator: And he puzzled and puzzed, till his puzzler was sore.
Then the Grinch thought of something he hadn't before!
"Maybe Christmas," he thought, "doesn't come from a store.
Maybe Christmas… perhaps… means a little bit more."

Merry Christmas, Happy Holidays...whatever you do, I hope you enjoy doing it with family and friends...cheers!

Much more to come!!!
hugs and kisses...
homefry sketchbook. 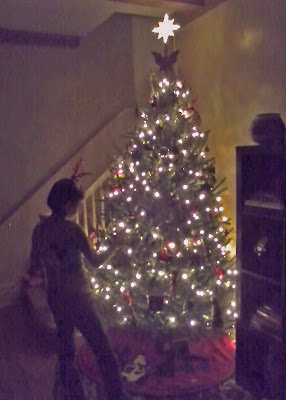 "We're kicking off our fun old fashioned family Christmas by heading out into the country in the old front-wheel drive sleigh to embrace the frosty majesty of the winter landscape and select that most important of Christmas symbols."
National Lampoon's Christmas Vacation
...That's right, I went to Home Depot to get my tree this year...elves with orange aprons...tightly bound trees...I'm trying to reconcile this.
You can to.
There is redemption for your hungry, consumer soul if you shop independents as much(or more) as you shop the big boys...instead try: etsy, local artists/craftsmen, friends' studios, pottery tours, holiday craft sales, locally owned record shops...My goodness man, there is still time! 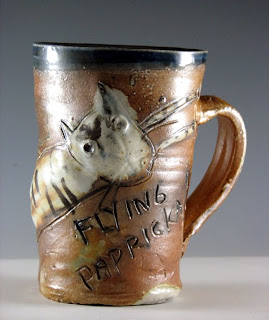 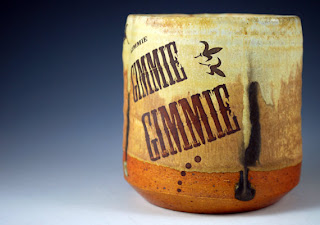 Flying Cat Mug by Nancy Smeltzer and GIMMIE mug by yours truly...just sayin'.
Posted by k.houser at 6:32 PM No comments: