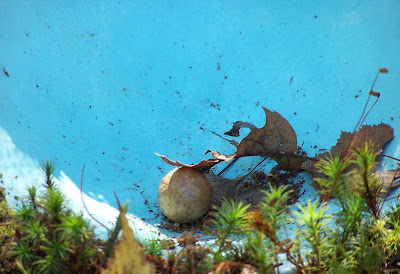 I offer up this post to you gentle reader...I recently received a disk full of images from my friends at I-Park...Agnes Miyuki has been diligently documenting my piece that I made as a site specific work while I was in residence there. It is titled Collection/Offering and consists of 41 shallow bowl forms ranging from 2 inches to 14 inches across. The collector bowl forms were laid to rest in the ground up to their lips, flush with the earth around them, on a small shaded hillside that accentuates a large green moss bed. They make a large sweeping curve around the moss with the largest of the forms at the bottom and slowly shrinking in size as the arc climbs the hill and seems to disappear in the woods.
I was fortunate enough to participate in this wonderful residency program there in the deep woods of East Haddam, Connecticut in September of 07'. The piece was a time marker of sorts for me as I was spending my 41st birthday there...my big day also falls on the first day of Autumn, the 22nd, so it seemed especially relevant for me to create this piece that would begin to collect the falling leaves...among other things.
The work is meant to be left in the ground...to be unobtrusive to the existing landscape...only to add sky blue polka dots to the hillside. Being there at I-Park, surrounded by 450 acres of woodsy beauty to walk around on, me and the other 5 residents were always picking up natural materials and bringing them back into our studios. I came up with the concept of Collection/Offering while there and quickly began to throw all my forms. The idea is that the natural surroundings helped to inspire us in different ways ...in a sense, offering up its beauty for us to make sense of in a variety of ways. 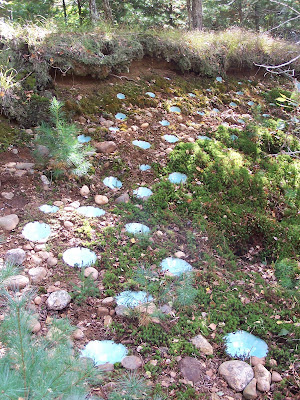 The forms collected leaves and debris which were then sort of showcased against the clean, bright blue, ceramic interiors. As the months went on and the seasons changed the piece changed...at times it disappeared completely covered in the snow...the moss died back then grew back... it grew around and over the collector forms, obscuring some completely with help from the fallen leaves and branches. Nature is in the process of taking back the space I encroached upon... returning the mossy hillside to the way it was and my footprint of this work becomes an artifact to be uncovered much, much later. 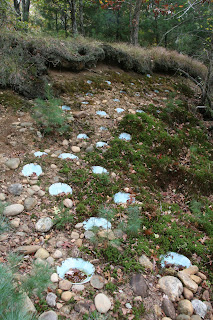 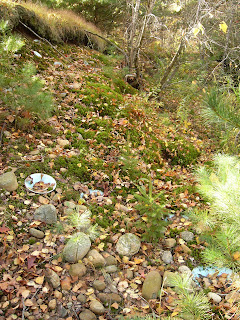 With a combination of my original images, Agnes' documentation through the seasons, and a digital sound recording of me force cooling all the pieces, I have the makings of a nice size installation piece. The sound element was recorded by fellow resident Sonja Hinrichsen ...it is a potter's nightmare piece...20 minutes of random Gamelon like pinging in clear digital technology. 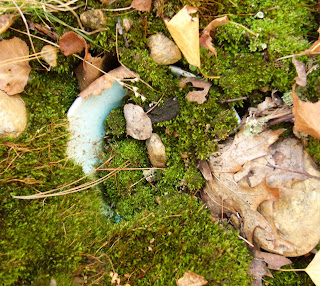 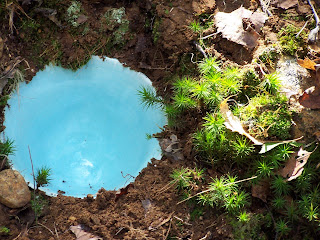 It was hard to choose just a handful of images for this post...I am showing restraint in only posting these. It is still a work in progress with a lot of details to be worked out, that includes finding a place to show as well. Many thanks go out to Agnes at I-Park for her help with the seasonal documentation ...its not often I can leave a large site specific/time based piece in place and have it documented through out the months for over a year! That reminds me...I have got to get some summer residency applications out...until next time gentle reader...stay warm. 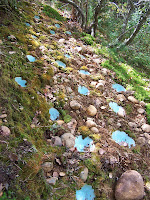 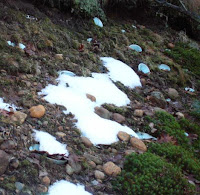 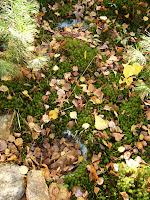 You and Christo!
When I heard that Christo was going to do a huge, very expensive "installation" project with big yellow umbrellas on the hillsides of Interstate 5 (south of Bakersfield toward LA), I thought the whole thing was nuts. Then, I saw it. And it was amazing.
Now, whenever I travel that route (maybe 6 times a year), I ALWAYS remember what it looked like dotted with huge yellow umbrellas.
Makes you see things differently.
Loved this post. Thanks for sharing!