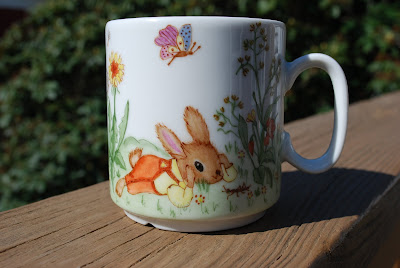 Happy Easter...eggs. After all the bunny stuff this morning, I am squeaking out some time to recap my NCECA experience. This was a fun trip with a whole lot to hear and see and I was able to bump into and meet up with many friends whom I have not seen in a long time. I saw some really great pots in the "Strictly Functional" show and bought a couple mugs at the "Cup Show"...I went to several really good talks and scored a new tool or too to boot. One of the better talks I went to was given by my friend Justin Lambert, "Flash and Ash", and was choked full of great advice and tips concerning many aspects of wood firing. Justin's pieces are really gorgeous and it almost seems impossible to think that he rarely uses a glaze or even a slip. This is the link to his talk from NCECA. Downtown Philadelphia was bustling at all hours and there was never a shortage of something to do or see. I was not the best about shooting a lot of images however...we were doing a lot of walking and I was traveling light. So the main images all come from the madness that was "First Friday" in the "old city"...all the galleries were having openings and stir into the mix about 6,000 more clay folks searching out ceramics and you have quite an event.
Me and my NCECA companions, Maki Funi and Dan Kuhn hiked about 10 blocks from our hotel and made the rounds to The Clay Studio, PH Gallery, Nakashimi Gallery, and a handful of other smaller galleries checking out all the clay and soaking up the free or cheap beers, wines, and whatnots.

The Clay Studio was everybody's main destination and it was packed. There was a lot of great work to be seen there like these two small but powerful pieces by Nathan Prouty and Jeremy Brooks. 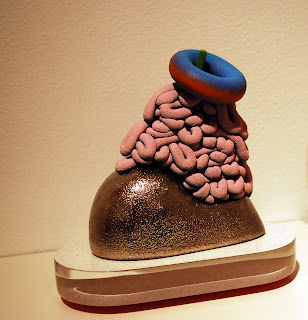 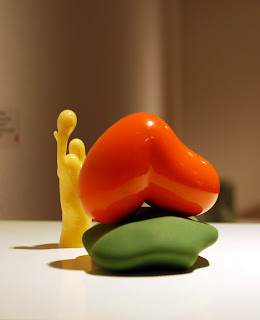 I also loved this wall piece at The Clay Studio... ceramic bits and pieces, vinyls, Japanese influenced fish imagery, a nude woman on a tortoise, and plenty of gold luster...whats there not to love. 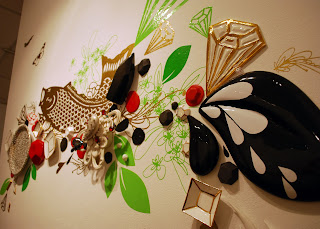 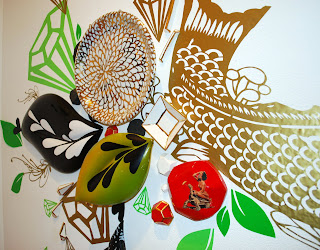 We also some some great historical pots at the Nokashimi Gallery...awesome Ken Fergeson shino baskets and equally awesome wood furniture. 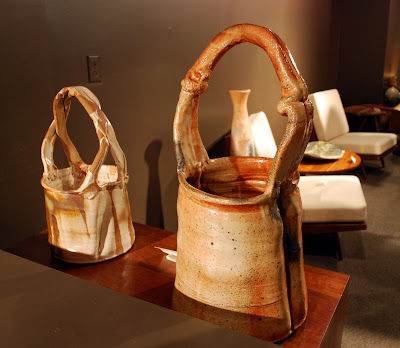 Another show I really liked "Flotsam and Jetsam" featured new works by Rain Harris and I must say, they were some of my favorite things I saw the entire conference. They were simplified, decorative forms glazed in a solid opaque color and then layered in commercial decals. Here are several images...what great surfaces. 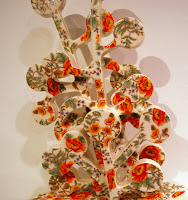 One of the biggest bummers of the night however was that a bunch of the galleries closed at 8:00...yeah, 8. There were literally hundreds of people out walking around just to see what some of these places had to offer and they simply closed the doors right in our faces. The Wexler Gallery was one of these places...they had advertised this big name contemporary ceramic show and instead of stretching out the regular hours for their "First Friday" opening to accommodate the overflow of people who wanted to see the exhibition, they just locked the doors promptly at 8:00. I squat on you Wexler.
But those galleries that did stay open later were bumbin' to say the least. Like I said before, I got to see a lot of people whom I have not seen in a while...one of these somebodies I really couldn't wait to see...the hardest working woman in Philly, Ashley Dodge. Ashley worked as the tech for the ceramics department in Chautauqua back in the summer of 08. We had a blast that summer but I have not seen her since that August. Currently she works as a production assistant for a local Philadelphia ceramist and she is involved with a group of people that promote the arts along with the social and cultural well being of their neighborhoods in the Fishtown area of Philly. Ashley was showing her new Blaauw fired work, which I loved, and her friends exhibited paintings, and mini-installation type work. This was a solid show and also a great little space that was jamming all night. Below is the front of the gallery...Maki on the side...Dan...and Ashley workin' her work on the other side. The other image is Ashley and another super person who I have not seen since the 08 Chautauqua season also...straight from Brooklyn...Devin!YAY! 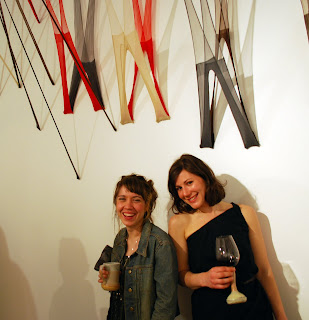 Clay is a good community, and it was great reconnecting. 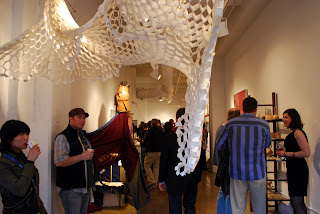 Pardon the brief tour of NCECA but I hope that was enough to give you a little taste of what was going down...Now excuse me while I rest and recover...

thanks for the post kyle, i wished i could've gone... all that clay, i've got NCECA envy. looks like you had a good time.