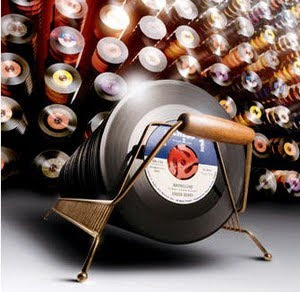 Happy Record Store Day to you all.

That's right, its national Record Store Day and I'm home celebrating with some of my favorite old records during a very miserable Saturday afternoon. We have had crazy high winds and rain since I woke up this morning but that did not stop me from heading out to my locally owned and operated record store. It was hustling and bustling with folks clamoring for record store deals and limited edition issues of vinyl put out just for this occasion. Very cool indeed.

Records, actual vinyl records, have been on the come back as of late. I am thrilled about this because I love vinyl...heck as you probably know, I love music. Music has been a life long addiction for me and I have a nice little collection. I started really collecting music in the mid-80s when I began working at a regional chain store in the mall. I scored bunches of promos and abused my employee discount, giving back large chunks of my paycheck. The mall store was my gateway drug to much hipper independent record stores that I began to hang out in and peruse music by the hour. I eventually ended up working for an Atlanta based record store chain called Turtle's. I believe they were only located in the southeast, possibly just Florida and Georgia. I worked for them in two different towns while I put myself though my undergraduate at FSU.

I logged many an hour inside record stores. I was around when CD's first made their appearance...it was like the second coming of Christ in 1985...everybody talking about the fidelity of the Disk. We had one very small rack that showcased the very few artists that were available on CD at at the time. Then a couple of years later, I remember the day that we had to box up and send back all of the records in the store. All the vinyl was being recalled and shipped back to the home warehouse. No more records...just CD's...and tapes. Then tapes fell by the wayside too and eventually went the way of the 8 track. Now we just magically download music to all of our gadgets. No more great cover art, liner notes, bonus stickers or posters, just a whole lotta "convenience" I guess.

Me, I'm happy to play records from my past(Husker Du, Minutemen, The Cure, Galaxie 500) but I have been buying new vinyl to listen to as well(Tom Waits, Iron and Wine, Black Keys, Blakroc). The cool thing is a lot of the new records include digital downloads or even a copy of the CD within the jacket. I'm not adverse to a little of this generation's "convenience"...can't play records in a clay studio...or at least not for very long. So I am happy that the vinyl record is having a resurgence and that there are people who want something a little more tangible. Speaking of tangible...I promise more clay next time.
PS. Check out the picture at the bottom of this post...that's me and my two co-workers in Gainesville, FLA...Turtle's circa 1987-88. The tall guy is Paul Tatara(writes a blog on pop culture,check my sidebar) and Brian Jones. I'm the guy in the black shirt on the right. So very 80's. 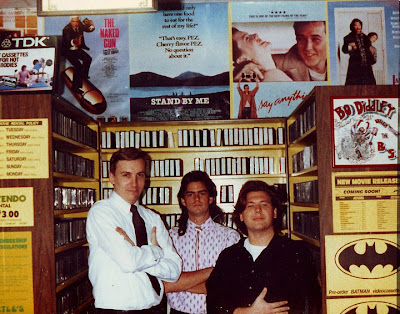 Hope your weather is better than mine.
Posted by k.houser at 1:47 PM

Everything's raisin' but the wages..... I think that might be stuck in my head the rest of the day.
:)

Awesome photo. I'm 99.9% sure I met you at the Gainesville Turtles. Do you ever hear anything from Brian Jones?

I spent some time record storing today. It makes me feel like an old fart.

Toots...Im pretty sure that was it...you were living in the trailer just around the corner. I love that pic too...Honestly, Turtles in Gville was good times...co-workers, record store hanger outers(you), Bo Diddly, the River Phoenix clan...I recently connected with Brian on fb...also his girl at the time Evette... remember her? Brian is living in Orlando...couple cute little girls...have not really talked in any length however...just the usual facebook stuff.
And I agree...OLD we are.

"That's easy. Pez, Cherry flavored Pez. No question about it."

hi kyle,
that's a great pic of you. the post made a bit nostalgic and a bit sad as well. my vinyl collection had dwindled over the years of moving and not being able to haul them each time i moved and then when i extended my studio i had to get rid of them because there were so many and they're so heavy and i hadn't played them in years and they were taking up valuable space, etc. (can you tell i feel guilty?). i had about 60 deutche gramaphones that had only been played once to record them onto cassette and the vinyl record stores in town didn't even want them at all! i sold about 15 harder to find blues albums to a different store and some other guy ended up giving me about 20 dollars for everything i had left which was a couple hundred albums.