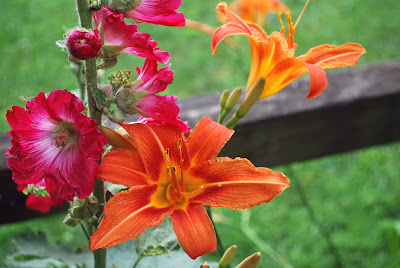 Summers up north are so much different than mine ever were growing up in Florida. We have an ebb and flow of summer heat here in the foothills of western PA and the further north you go it feels less and less like the summers I knew. The past few days we have been having a bit of a dip in temperatures and it seems to slow life down even more than the season has already done. The cool evening breezes remind me of the oncoming of Autumn but I know its way to soon and all it ends up doing is conjuring a strange sense of nostalgia and melancholy more associated to the Fall season. Speaking of nostalgia, I just returned from a short visit to Chautauqua, NY. The weather up there...even cooler and really,really wet...kinda typical early Chautauqua weather.

If you have been reading the homefry blog for the last few years you would know that about this time of the year I am posting from the art school there within the Chautauqua Institution. At the end of the season last summer I opted out of the summer long gig there to teach here at home. But I did visit for a couple of days to enlighten the new "Kilnmaster"about some of the intricacies of running the program there ... in fact I just returned. The new "me" there is a good guy named Frederick Bartolovic and he seems to have everything ready to rock. Frederick has a very competent new tech and after a week or two they should have everything down pat. It is a unique program with plenty of unique personalities and some rather unique quirks that do take some getting used to. Enjoy boys...

It was nice to see a few familiar faces in the art school but for the most part it felt like a totally different place. It was always different year to year...although the art school and the Institution are highly resistant to change, there was always new faces hanging out for the season. This year, visiting and not being covered in clay, I just felt like I was one of those many people coming for a sequestered and damp holiday on the lake. It was a little bit of a nostalgic trip for me...and how could it not have been, Chautauqua is a 120 year old Victorian community that calls itself an "American Utopia"...it revels in nostalgia. After haunting the grounds some like a good tourist, I hit a couple of my favorite breakfast spots(Steadman's and Bo'Nars) and eventually did what I think I did best while living up there for the last three summers...drink beer and eat wings! We escaped the rain by hunkering down over in Bemus Point at the Village Casino...which is not really a casino, but a marina bar and restaurant. I was joined by John Moses Girdler, whom I met last year(and has returned for a repeat performance to bust out a load of work), and Frank and Polly Martin. Frank and Polly are old hands at the Chautauqua business and were very helpful to me when I started working there. I have a great deal of respect for both and admire each of their work, and it was great to hang out with them, John, and the kids. Here's my souvenir picture below. That's my daughter, Frank, John, me, Polly, and the Martin kids. 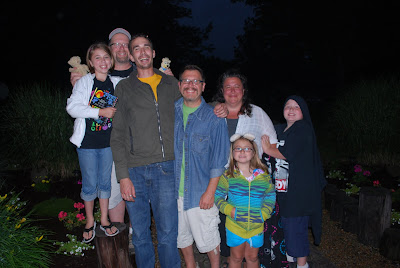 Before I hit the highway and headed back to PA, I got a chance to check out the galleries and see the exhibition that Nancy has work in. The show was carefully curated by my friend and Director of Galleries, Judy Barie. The exhibition is an animal themed show that showcases ceramics, pristine large format black and white taxidermy animal photos, and a host of mixed media critters. 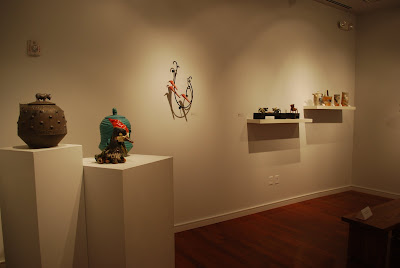 Here are a couple pics of big pots by Christian Kuharik and a few crazy clay birds by ...somebody whose name I forgot...sorry, but those birds were pretty cool. Outside in the piazza between the two large galleries, the new large "pedestal toppers" by Kuharik were recently installed...here's a pic of two and there are two more at the other end not pictured here. 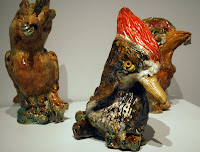 Below are a few shots of Nancy's wood fired works sporting different birds...Kingfishers, Herons, and Cowbirds on the floating shelves right next to Wesley Anderegg's fierce little dogs. As usual, its a great looking show in a great looking space. Click to enlarge. 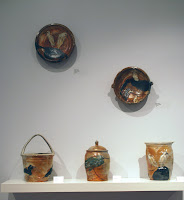 So ends my nostalgic Chautauqua wandering and its time to check back in to my very real life here in PA this summer...back to my failed pots and crappy clay body(more on that next time), back to teaching and tending my garden.

nos·tal·gia - a wistful desire to return in thought or in fact to a former time in one's life, to one's home or homeland, or to one's family and friends; a sentimental yearning for the happinessof a former place or time.

hi kyle,
i just visited florida for a week and, being from central ny, hated it. your descriptions of chautauqua made me want to move there. i think it's been wet everywhere east of the mississippi this year. lovely pots a few posts back.

That looks like a show I'd have loved to seen in person. Cool to see the pics.

Song of the week or so -- "Life in a Northern Town" made ME kind of nostalgic although for what I'm not sure. Been in the deep south for sooo long now.

(ugh..sorry about the pot failure and crappy clay. bummer)