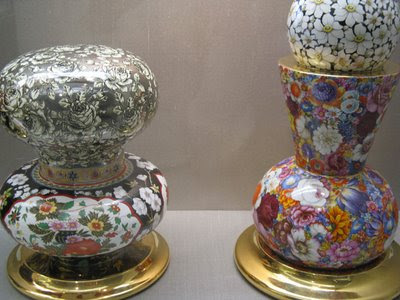 How quickly things change...the weather, gas prices...my moods. I have been a little disgruntled about my pieces and the trials and troubles I have been having with them. The root of the problem was that they never got a really good cone 5 firing. I think that some did and some didn't...just depends where they were in the kiln and which load they were in too. This is just like I said last post..."that's ceramics" and for those of you who doubt the number of issues related to electric kiln oxidation firing...I'm here to tell ya brothers...there's plenty. I have refired and refired to really not much avail. I have a handful of pieces that at the moment will be fine and maybe even more than fine. But, and this is a big but, I will lose the majority of the work. Whatever. I have already planned to use them in the border around the new expansion project of the garden. I also never got around to making the larger hand built stuff I wanted to make due to extra work at IUP and my troubles with this grouping of work. Smell that...that's frustration...and as I type this I getting a little bummed again...BUT, I will be teaching beginning ceramics for 10 weeks at IUP this summer along with another course or two within the art department and I will have ample time(at least I think)to abuse the studio and the kilns there. So I guess that's the brighter side but honestly my overall rating for my winter ceramic endeavors would be a ..."D-". 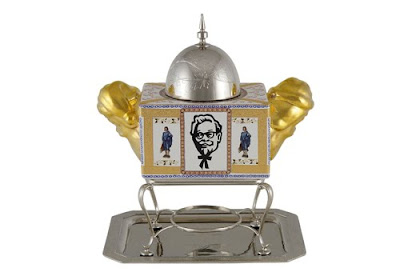 That's about enough of that ..today however, while in my favorite reading spot(bathroom) I ran across an article on Leopold Foulem(both images above) in an old Ceramics Monthly...October 1999 to be exact. I haven't thought about him in a while. He was(and still is) pretty big for me when I started getting into the work that I have been doing for the last five years or more now. The article was just OK and it lacked any real meaningful content about the varied surface patterns created by the decals. Unbelievably there was no talk of why he was creating these varied surfaces but in good "old" Ceramics Monthly form it did give a play by play on how the decals are applied...heavy stuff(not)...mostly though, it was all about negating the function of the form by the introduction of a stand or base. Foulem believes he was divorcing the form from its ordinary existence by elevating it on a "base". He did have some interesting talk about being caught "in between" the ceramics world and the fine art world. I quote, "People who collect craft don't really go for this because its not craft and the people who collect art don't really go for it, so there is a grey zone, I work within the grey zone." Funny thing is, I think his work has everything to do with craft. I believe the audience he is attempting to create a dialog with is one that is more craft based and also interested in a very specific niche. His work communicates histories of form and surface, culled together from the objects that have inhabited our homes for generations. Simply by creating an object, one does not transcend a medium or for that matter a little thing called craft. I'm not sure but after reading his "artist statement"(below)
"Ceramics is an independent and autonomous art form with its own laws and specific vocabulary. It is within that context that I intentionally locate and construct the propositions for most of my formal explorations. In order to achieve a correct understanding and accurate interpretation of the true meaning and significance of my ceramics, these facts must be acknowledged and pondered seriously.
I believe that genuine art is about concepts and indisputably neither about medium nor style, nor even about making. My ceramics are about ideas. My artistic output is never about self-expression or the pursuit of beauty. I consider myself some kind of composer and theoretician instead of a virtuoso."
...it felt as though he was hoping that his team would trade him or that he was telling everybody that he was getting a call to play in the "big show". I do not disagree with some of his remarks but I do believe that simply because you erase your "hand" in the work, your not erasing self-expression and that he does strive for formal ideas of beauty in his work and they become a key factor in the visual seduction of the viewer. Hey, whats wrong with a little self expression anyways?! Sometimes reading artist statements leaves me scratching my head and wondering about the disconnect between the actual work and what the artist's own intentions really are about.
These days, I think the boundaries of what is termed "craft" has been gloriously stretched and all good art and craft, fine, high or lowbrow engages more than just the aesthetic or formal sensibilities of the viewer. Ceramics and the ceramic object have grown since this article and fine art and fine craft have moved beyond being just flirtatious. Leopold's personal dilemma/confusion may be one that many of us have gone through in the last ten years, myself included. Call it growing pains or whatever but there is a lot more people swimming in the "grey zone" of the pool. I'm not offering up answers here but I am forever interested in talking about fine art or fine craft or anything for that matter...bottom line...communication comes in all forms. SO, let me lighten the mood here... if you are interested in art theory or interested in catching up and slapping a little theory on your own work, please view the video below...everybody should view the video...I love this guy, he kills me...if you have an aversion to curse words, then maybe you should skip it...but its soooo good.

Anyways, here's a sneaky peek at some of the pieces that will be getting an 018 firing (below) ...they should look pretty similar after the firing...I hope. Right now they look pretty damn nice...I am really happy with the commercial decals I recently purchased...that and a little bling bling gold luster goes a long way baby. See you later Internet. 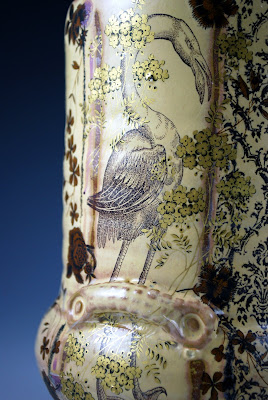 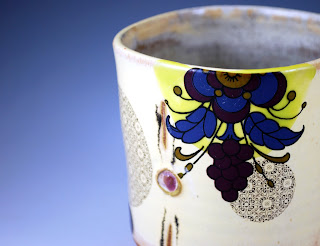 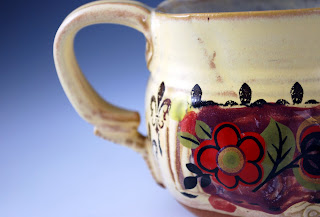 Me thinks you use a quote from your thesis? nice and heady I like it

A Truckload of Art said...

Awesome post Kyle!
Hard to believe that '99 was such a long time ago in relation to art/craft thought. Thank god there is movement to better suit my britches. After all "makin' the shit is the easy part"...awesome video too.

Yay. Great post. I always feel a little skeptical when artists try too hard to distance themselves from craft. I mean if you have to spend that much breath explaining it away...

Heh. I'm going to have a really hard time not using 'see you later internet'
:)

thanks for the comments folks...sometimes you gotta call it like you see it...and maybe I should change the name of this blog to "notes from the grey zone"...or NOT.

Hope you enjoyed my man Henrock...so many really funny and smart videos...look him up.