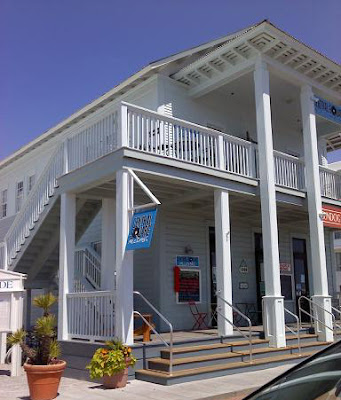 I'm back in grey, overcast western PA after almost a week down in sunny FLA visiting my family. Its great to have family who live at the beach. I'm tanned and recharged full of Bloody Marys and fresh seafood ready to start making new work and teaching classes. I will stop "rubbing in" my sun filled beach lounging right after I tell you about an extra bonus that happened while I was there.
The long strip of beach living along 30A there in between Panama City and Destin is teeming with restaurants and bars and lots of young, good looking, hip folk who really appreciate good music. I saw a couple of good local bands while there but the highlight came from a place called Central Square Records(who apparently do not have a website) in Seaside. This is a great record store...a record store among record stores...a long surviving example of "back in the day" located directly across from the ocean. Its always a destination for me, not because I can get great food and Bloody Marys "to walk around with" at the restaurant next door but because I can go and hang out...talk new music and really geek out. They never disappoint ...here's a pic of the place above from my cell phone...the record store is upstairs and there is an equally great indie book store downstairs. Below are a couple pics also from my handy cell phone of the in store event. David Lowery formerly of Cracker formerly of Camper Van Beethoven played a short but sweet mini gig right in the middle of the store. It was packed with beer toting, beach going hipsters from all over...Patrick Carney from the Black Keys e 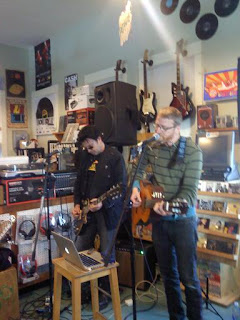 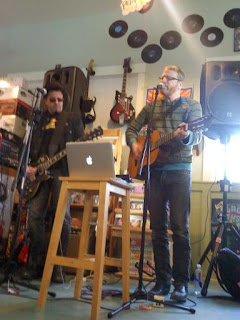 On another note, while I was baking in the sun I got a cool email from a potter who writes a blog that I have recently been checking out. Carter Gillies wrote a response to my sincerity rant/post. He emailed because he had a well thought out, "too long for the comment box", response...so I decided to post it here. Its great to get some real dialogue happening once in a while. I often try and often just hear crickets. That's the blog world though...it seems like a one way street sometimes, so I was thrilled to have some new content based on issues I have been scratching my head about. You should also check out his blog...good solid content(more consistent than me) and really nice looking pots...there is a link on his name here and he is also on my blog roll on the sidebar. So thanks Carter...nice to meet you online and its too bad your not closer because I think you would make a nice edition to our 7 dollar import pitcher night! Below is Carter's perspective on the issue of "sincere" and how it relates to him as a potter. Please chime in on the ol' comment box to add your own view...or bring a few beers and come sit on my back deck.
Kyle, I just tried to post this comment to your "sincerity" entry, but it was too long. I thought you' maybe enjoy my flailing about on this issue since we seem to be kindred spirits in a lot of ways. Here is what I tried to post:


Hey Kyle, I just found your blog today (which only means I need to get out into the internet stream more!). I love what you have to say. I know this post is a few weeks old but I've been wrestling with some of the same issues and I'd love to hear your further thoughts.

I think you are absolutely on target that these days art is so many things, only one of which is sincere. In my mind art is just one more form of human communication and as such it expresses an artist's take on things, events, and the culture's pervasive idioms. So sometimes art aims at being sincere. But with the establishment emphasis on 'content' quite often we are treated to commentary by artists whose agendas include everything from challenging the viewer to expressing abstract or mundane notions. And more. Sincerity seems to be more about a person's intent to communicate honestly than something that can be trapped once and for all.

For instance, two people can say the exact same thing but one person can be sincere and another not, or the same person mean it differently at different times. So sincerity also seems difficult to pin down, and can float through our fingers as soon as we try to grasp it. This especially seems to be an issue if we pretend our sincerity has been permanently placed inside some fixed material object. Whatever truth it has died the moment we change our minds and move on to new interests. Sincerity is like looking at a stop watch after a race: It embraces a mere moment in time.

And the reason potters are having such a hard time of it is that we don't do these other 'content' things very well. The idea of beauty and function is less important in the new art domain than it was in years past. Or maybe I'm making that up. But it seems like potters have sought refuge from the batterings of the establishment in ideas such as 'sincere', 'authentic', and 'original'. It seems as if we can't walk the walk in the other conceptual avenues very well, so we at least pretend to talk the talk with soul searching vocabulary like this. It gives us the idea that we are at least still clinging to the foot of the pedestal that contemporary art is occupying.

But it also seems like we are playing games with poorly understood words when we fixate on ideas like 'original', 'authentic' and 'sincere'. And because they are the new $10 words we potters often feel the need to apply them to our own work as well. The problem as I see it is that we also face a huge and incompatible pressure from our need to satisfy the demands of a marketplace. Customer's don't really want our authentically disgorged 'who I am at this very moment'. They don't want the sincere expression of how we are feeling at the moment. They would much rather have a stock answer of "I'm fine and this is the kind of pot I make". All that sincerity, authenticity, and originality is supposed to refer back to is really only a shifting target that grows as we experience new things, contradicts itself from one moment to the next, and is polluted by everything it sees, does, and experiences. But through this straightjacketing of commerce we force all those little inconsistencies aside and pretend to a relatively unchanging ideal of 'self' that hides behind the mask.

Sometimes our work as artists seems more habitual than anything else. We don't allow ourselves to break free of our momentum and this becomes a self fulfilling prophecy. The ruts of our habits become so deep that we can't change our art no matter how many different new things are going on in our lives, no matter how much what we like and don't like changes, and no matter how we have actually outgrown the tiny seedling that started the ball rolling in that one direction.

So I would say that if we really wanted to be honest about our sincerity we wouldn't put it in such tight little boxes. It might be something one day and something different the next, kind of like what I'm going to have for dinner this week. I sincerely like more than one thing, and only eating Mexican food for the rest of my life would be sincerely disappointing. We just aren't simple creatures. Except in how we express ourselves through art. Doesn't that seem strange?


I hope you had a good laugh reading this! You seem like a thinker and you obviously care about issues like these. I hope you take all my noise as the floundering it really is. I'm just trying to figure this stuff out myself. I wish I could have been there at the bar with you guys when you were discussing this. Maybe you can still talk some sense into me. I will read your blog with interest!

So many good points. I want to snap my fingers in recognition. Acknowledging the perpetual evolution of creative inquiry is perhaps the most sincere position we can take. The downside to all of this seems to be that we are preaching to the choir. There will be those who are interested in mulling over the nature of making and those who aren't, but I think the most exciting by product is the documented dialogue that goes on in the blog-o-sphere. As long a we keep each other in check and don't turn our words and concurrence into unintentional manifestos. Tricky, but I've got faith!

*sigh...I'd so like to comment more thoughtfully and more often so the cricket noise wouldn't be so loud, but the thoughts that seem so clear in my head become gibberish when I start to write them down. But you know, these posts that you and Carter and others write keep me thinking even after my blog reading coffee break has ended, and I'm heading back into the studio. Sometimes I check back and read them again. Now if we were talking over $7 import pitchers, I might be able to contribute......Coherence of course would be dependent on how many $7 pitchers we're talking about.

I wish I was close enough for that $7 pitchers night! Drink a few for me in my absence!

Oh, and I'm glad you liked my rambling. Somewhere in all that meandering there seems to be something interesting....

In an ironic twist of my lamenting here about not being able to thoughtfully comment more often, I tried to leave a response to the comment you left on my mine, and blogger wouldn't let me and then ate it. Kind of had to laugh...out loud. (But thanks, noted)