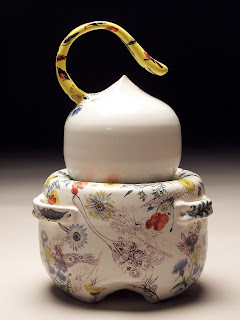 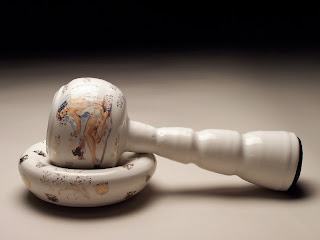 So, after my last post about ZENCLAY... I thought, duh, why did I not show what pieces were going to be there for their exhibition. This is the sole reason for this little piece of propaganda. Here they are...The Male Fantasy Rattle and The Egg Cup. The rattle is one of three that I made for my thesis show at the end of '06...it is actually a rattle with a nice low tone...the dish or 'docking station' has a nice big gold lustre elk's club decal in the center and is polka dotted with gold lustre Moose Lodge decals. The rattle can sit in the upright or erect position as well...it will not slide due to the rubberized bottom, holds it securly in the 'up' position. However, I tend to feel a little more comfortable showing it in the 'cigarette and ashtry position'. The Egg Cup is much more about the visual rather than the utiltarian...it also is two pieces that 'nest' together...most everything I was making at this time had to do with the symbiotic relationship of a cup and saucer. 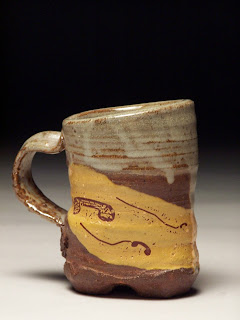 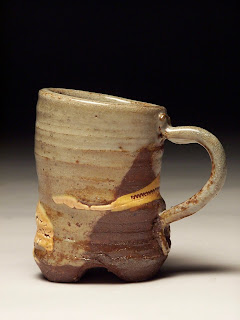 The other toot of my own horn is news of me showing this little jewel at The North American Ceramic Cup Show at Sienna Heights University in Michigan. The show runs from March 10th-end of the month. I do like this mug. I was using an iron rich course sculpture body clay to throw with...I made a small number of pieces and switched back to the lighter clay body. The clay body itself really reduces well in the wood fire..going brick red to dark brown sometimes..nice looking rugged body, maybe not for everybody but...I still like this funky psuedo-Japanese meets pop culture mug. I am happy it was juried into the show. And thats my fanfare for today.