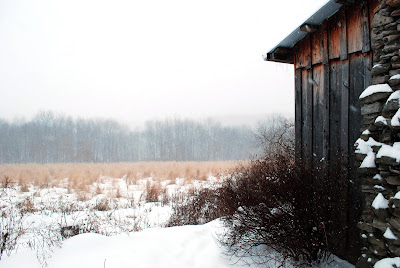 As January is coming to a close I have to say, I hope the rest of the year goes as well as this month did...minus all the snow. That's what this post is all about kids...its the wrap -up show for month numero uno of 2011. So lets run it down...
Early on in the new year I received an email from some nice folks down under in Australia. This person Esa writes a great blog there called The Ridou Report . He has a wonderful art collection which happens to include a lot of really nice ceramics. At the beginning of the year he posted a pretty cool list of his wood fired pots and it just so happens that I'm included. Not only am I included in this group of wood fire potters but also a couple friends too...Justin Lambert and Josh Floyd...as well as another internet friend(we have never actually met in person, but still...), Keith "Mudstuffing" Phillips and also a blogger potter whom I read regularly, Michael Kline. Justin Lambert is down in Florida and Josh lives about 15 minutes from me here in PA. I am thrilled to be in such good company and love the fact that there might be people on the other side of this little planet admiring my clay work. Speaking of being in good company, I was also invited to be part of a great pre-NCECA exhibition down in Florida. The show is "Atmosphere: A Ceramics Invitational Exhibition" at The Lighthouse Art Center, Museum and Art School located "in a much warmer place than where I live", FLA. The show is curated by my friend Justin Lambert,whom I just mentioned, and includes some stellar names in the world of atmospheric firing. Again, I am so pleased to be included in this roster of names. I plan on sending a few recent pieces down to the sunshine state...one below, you might have seen not too long ago posted back in December. 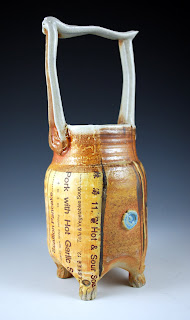 I also want to update everybody on the Self Serve Pottery Kiosk...the first month went pretty good...not gangbusters mind you but still pretty good for a "small, snow bound, college town over the X-mas break" kind of way. There was also a nice write up in an online thingy called Virginia Living about my buddy Adam Paulek regarding the kiosks. Click and read!
On a much sadder note, the beginning of the year brought about the end for a clay hero of mine... Paul Soldner. I was heavily influenced by Mr. Soldner early in my clay life as I fired sculptural and decorative Raku work solely for years before moving up north. I did have the opportunity to meet him once. I was attending a talk in Pittsburgh by Nancy Selvin and he was there...sarong and all. I introduced myself and told him about his influence on me...he asked if I was a student, and I responded that I was a graduate student at the time. His response was, "my condolences".

But, probably the best part of this month was getting to crank out a bunch of new work at my temporary winter home, Stoke Hole Pottery. The first image on this post was shot from the front door of the studio during one of our recent snow storms. Below are images of the work in progress. I plan on firing a glaze kiln in the next couple weeks but in the mean time...check these out, click to enlarge. 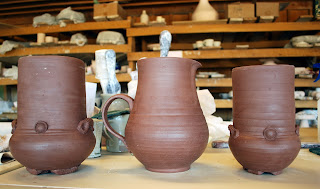 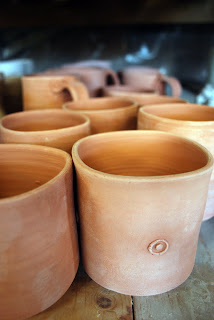 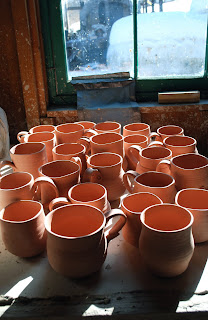 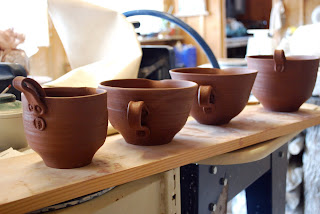 Stay warm out there and I hope your having a good beginning too!
Posted by k.houser at 3:46 PM

Love the picture in the back room. Now that's delicious h=january light!! Congrats on all the shows!!