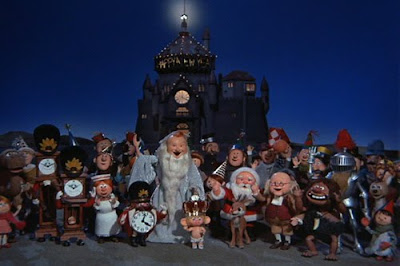 Happy New Year to you all...
The beginning of 2011 is already shaping up to bring about some new changes for this here ol' homefry guy. Change is something that I have become very accustomed to and these days I feel like its part of what I do and who I am. I'm talking about change because I have made a shift for the frigid winter months. My shift is two fold, a shift in studio spaces and a shift in the work itself. 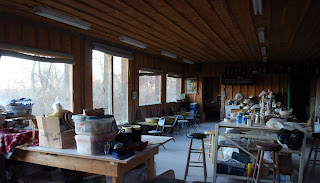 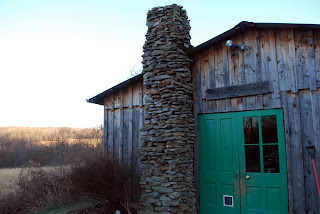 Let me just tell you, its been pretty darn cold up here in PA since the beginning of December and it doesn't look like its going to be changing anytime soon. That means that the studio with Nancy at Little Mahoning Creek Pottery will be in a deep freeze until the spring. Its awfully hard to keep the studio warm there with both of us working part time in other places. The wood kilns will hibernate until the thaw comes. So in the mean time, I will be working from another studio in my area...one that I have worked at before, and if you have been reading me for several years, you might remember...Stoke Hole Pottery. Deb English Frew and husband Birch Frew have a great place and they are generously allowing me work space this winter. Please click the link and revisit their studio, gallery, and general potter compound. I actually got started today...throwing tumblers and tankards with my new hazelnut brown stoneware. That's the other part of my shift...I will be firing nothing but cone 5/6 in the electric kiln for my time at Stoke Hole. I am hoping to make a large body of mid fire work with this chocolaty brown clay. This summer I felt like I had really hit on something with this combination of clay, glazes, and decals....here is an image of a bunch of pieces I made at Chautauqua below...pre-decals. 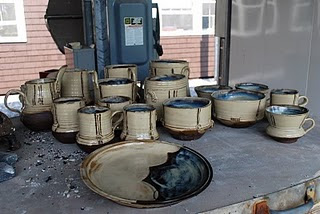 The clay body I have now is very similar and I will be using these same two glazes to finish the work. I got the Haystack glaze(exterior) from my buddy Dan Kuhn. He has modified it somewhat from its original recipe and its just what the doctor ordered...mostly opaque and warm and buttery in color. The interior glaze was a Chautauqua clay studio staple...Cream...not very exciting by itself but as you can see from the image, when it has some overlapping, it does some nice things. Best of all, both glazes stay pretty glossy when fired back to 04 and any change is for the positive. All this and cool decals AND some serious wax resist line work to boot!

As I focus on this new body of work, I am sure that in the back corner of my brain I will be thinking about returning to Little Mahoning Creek Pottery to chuck some wood into a firebox. More wood fired work to come, but not until its warmer. Speaking of Nancy...take a look at what she sprouted. This is the new gallery building! Its pretty awesome and bigger than either of us thought it might be. Nancy reclaimed all the old barn board that covers the place from an old shed/barn that was torn down there in the greater metropolitan area of Smicksburg. She hauled all the wood up and stacked it neatly in the yard this past Fall. Then she hired a three man team of Amish workers and they have done a real bang up job! They are almost done...just gotta put the jacuzzi tub in and...OK, not really, no jacuzzi...but they are almost done. Click to enlarge.

So thanks for tuning back into homefry sketchbook in 2011. I will keep you posted on the new work and updates regarding the Self Serve Pottery Kiosk's world domination plan and a myriad of other clay things.
Wishing you a prosperous and successful new year!
Posted by k.houser at 7:51 PM

thanks for the link homey. hope the new digs workout. back to the thesis