I hear my train a comin' 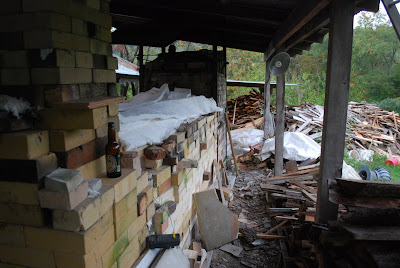 I have been wood firing in the western PA region since 2004 and every time I have fired, it has always been an event...sort of a cross between a community art happening and a potluck. This past firing of the train kiln was no different.

We loaded the kiln on Tuesday evening with the help of travelling raku artist Andy Wender and another local ceramist Janet Runyan, who is also on the upcoming studio tour...click her name to see more about her. Here is an image of me inside the coffin shaped ware chamber loading some of Nancy's mugs...Im looking a little buzzed here but I swear I only had one beer...maybe two. 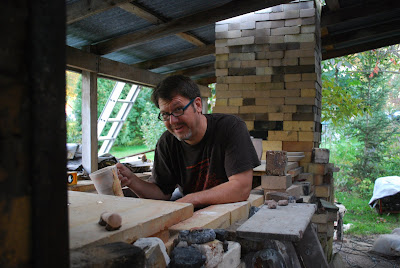 Nancy started the kiln at 7am on Wednesday...I got there about 4:30...Janet came around 8:00 and Andy helped out most of the day before he had to get ready to head back down south for another festival in Louisville, KY. and then back home to FLA. As usual everybody brought food and Nancy had the beer chilling in the fridge. I hit the wall around midnight and Nancy got back up to finish the firing with Janet until about 2:30am. Nineteen and a half hours was the shortest amount of time that train kiln has ever been fired. Its a hard kiln to fire, there is no sit down time and its sensitive to any move of a brick, passive damper or the chimney damper. It still may have issues as the front was super heated and we worked, and I mean worked, to get the temperature up in the back. Regardless, I am excited to see the results. I know there will be some pieces that will be in need of a re-fire but in the past, even when it did not fire as well, we have had some real gems from the kiln. Because of the extreme "one way" direction the flame takes the pieces always have two distinct sides and usually a great deal of ash...runny, gooey, and sometimes crusty. I had a handful or so of bigger pieces(lidded jars, serving dish, platter) in there and Janet had a small herd of hand built sheep along with a couple of her bigger sculptural pieces. Check out the image below as we all had a hand in the final bits of loading. 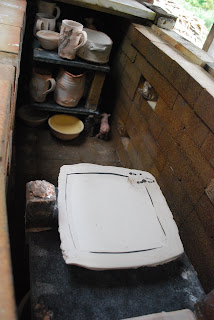 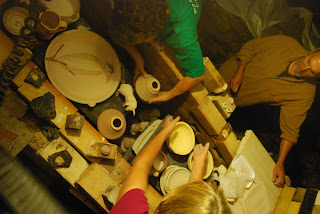 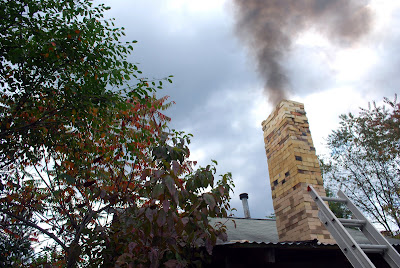 Can't wait to see it all, especially that Janet's herd of sheep!