Head in the clouds... 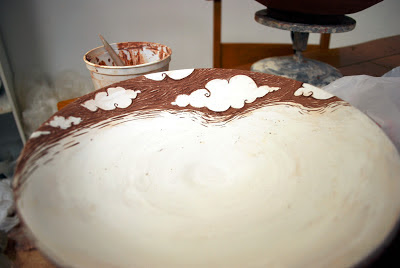 Lets just start off this Monday morning with a congratulations to Super Bowl champs the Baltimore Ravens...UGHHH, BOOOOOOO, hisssssssssssss. Here in the Steel City(Pittsburgh,PA to you clueless folks) it was hard to root for either team. Honestly, I hate the Ravens and was not wanting to see that thug Ray Lewis retire on the tip top of the pile but I also did not want San Francisco to have as many Super Bowl rings as my team the Steelers either. But what are ya gonna do...my hate for the Ravens won out and I was rooting for the 49's with the understanding that we can put together a better Steelers team next season and  make it to the Super Bowl AND then we would have climbed the stairway to seven...putting us two rings ahead. Oh well,  all in all it was a pretty good game and a hell of a spectacle...so I guess that's all I can ask if the Steelers aren't in it.

In between making fresh guacamole and icing down a six pack of Brooklyn Brown Ale, I put a lot of studio time in the last few days. Its very nice to have a warm studio space during the winter here in western Pa. In the main work space of the studio there are 2 radiators that really keep the place very comfortable. While throwing I don't need anything heavier than a t-shirt and I can be just fine with an old flannel shirt on when doing surface work at the table. But there are draw backs to a lot of heat in a ceramic studio...fast drying can be a bitch, as evidenced in the cracking of a couple large wall platters I spent a couple hours carving.(above image of platter with hairline cracks) I have since learned my lesson and now make sure to cover and let dry much slower, even when finished with a piece. The plus side of the radiators is that I can make work
faster...like these three large bottomless pieces... 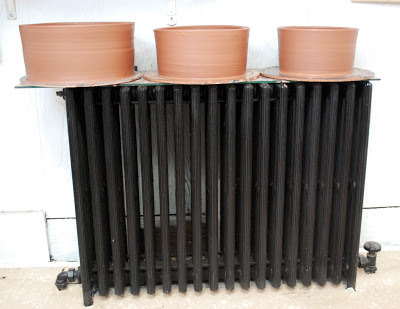 ...thrown and sat on the radiator for about a little bit while I worked on some slabs...very soon they were dry enough to shape them into ovals and add bottoms and a little later, clean up and add side handles and slip...all within the day. 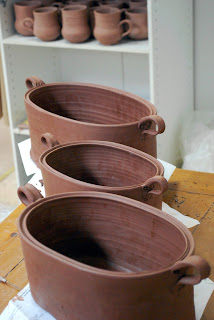 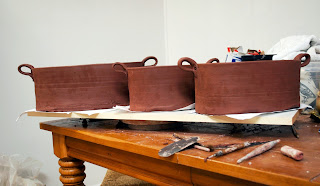 The next day I was able to carve completely around the pieces, even turning them upside down to carve at the base of the foot. 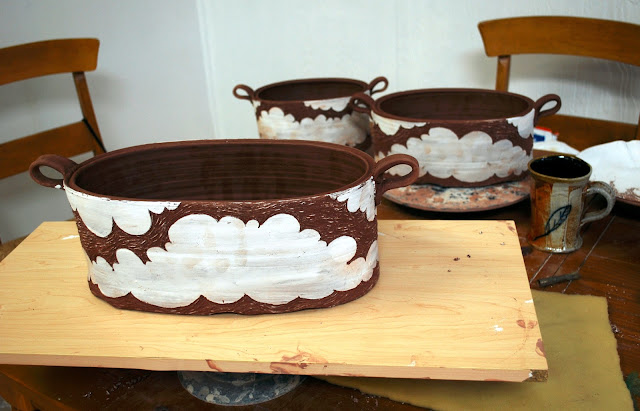 I am working on carving out these cloud like surfaces and I think they look pretty good on these long horizontal forms especially. Cloud like...blobby...sorta intestinal but either way they will provide an area of off white space  in contrast to the  brown clay body. This is where I will be firing my decal imagery...and the split lip and interior will be where you will find rich glazes that will be doing their thang. The cloud like forms on the surface are part of what I am now calling my "castaways" series... referring back to my last post about  "Life of Pi". I love this idea and continue to think back to this book, especially to the passage about being a castaway...that the only thing that is always a constant is our humble position between the sky above and ground, or in this case sea, beneath our feet. The idea that we are all caught up in what Pi's author Yann Martel called a "harrowing ballet of circles"...that we are hapless witnesses to our environments in a state of constant flux and that we are at the mercy of this maelstrom just floating along encountering life as it comes and in whatever form it comes is the stuff of inspiration for my surface imagery.

Firing this week for the first time in the new kiln!...Keep checking in...stay warm out there.

But how do you really feel about those Ravens, haha! I'm not that much into football, I live here in Chapel Hill, so it's all about basketball here, but I have to say that was a great game to watch. I did get the impression the Ravens are a bunch of thugs and was pulling for SF, but mostly just enjoyed that amazingly long run for a touchdown, even if It was a thug, it was pretty cool to see.
I like your cloud reference and love Brooklyn Ale:)

Tracey, we are talking about the Baltimore Ravens ...the dislike runs pretty deep around here...oh well maybe next year...lets see ...hmm...basketball...oh yeah, that sport with all the tall guys...I've heard of it;>)
Thanks for chiming in...cheers to you! clink(bottle of brown)