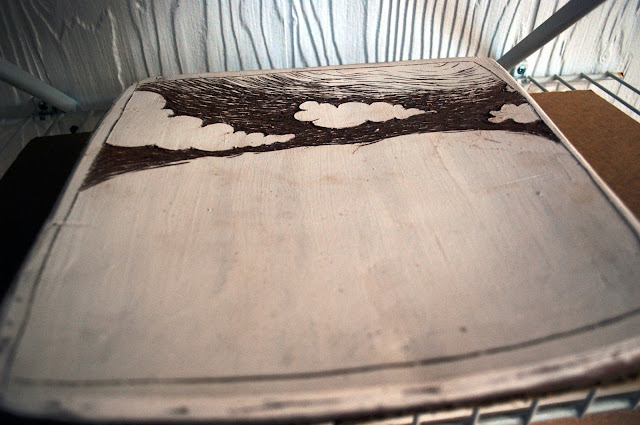 Or progress and process...take your pick...I'm up to my elbows in both. I thought I would post some pictures of that today, you know...process and progress.

I would be posting some glaze tests with a couple new colors and maybe how they look with decals on my nice brown clay body BUT I am waiting not so patiently anymore for my very nice handy man to install my vent for the kiln. He has been saying he would install it for the past couple of weeks now...you know, another job pops up, he gets sick, the truck breaks down...um, yeah...got it. But right now I have a couple kiln loads ready to rock and I am feeling like I am a bit behind. I need to get somebody else's behind in gear.

Anyways, lets look at some of that there progress. The image above is a slab built wall piece. I have been making a bunch of these...they are roughly a foot or so and softly square-ish. Imagine a bunch of flamingo necks all poking up here and there...a small flock of flamingos all gabbing about what kind of Chinese food they like best while basking under the expansive skies. That's where my head is with these...just you wait. I also felt like making some nice vertical pieces too since I have been making so many of those slabs and wall platters lately. Check out these vases. 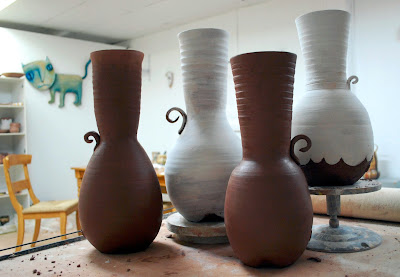 I made these four and they are all between 14 and 18 inches tall. They are great for flowers since the neck is narrow and there is a slight splaying out at the lip. I think I might make a couple more of these with another variation in the top section. I have decided to slip and carve two and simply stick to just glazing the other two. 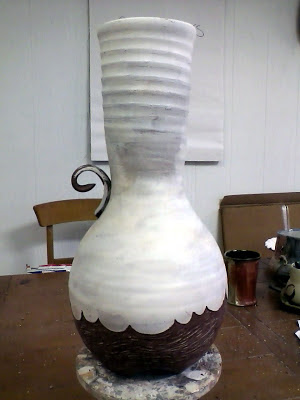 Here is that last one with its freshly carved lower section. Hopefully Monday I will be loading a bisque and I can get some pieces near complete...homey just wants to slap some graphics on those clouds!!! Keep your fingers crossed!
Posted by k.houser at 4:06 PM

the tall vessel,vase shapes are really nice. Nice and clean with throwing marks on the neck. Well Done.